Do you remember Purim three years ago, when anti-Israel blogger Richard Silverstein fell for a Purim prank, and then came up with a laughable excuse?

For the sake of my honor, I’ve got to explain a real boneheaded set of errors that happened last night, which happened to also be Purim.  This holiday is the equivalent of April Fool’s and it’s common to read wild newspaper stories attempting to take in the reader in a good natured way.  Of course, I was silly not to realize that Haaretz wrote just such a story claiming the Israeli government was planning to beam high tech ads onto the stones of the Kotel (Western Wall).  I got halfway through writing a post criticizing this plan when I realized the article was a Purim joke.  And a very funny one that took me in for the few minutes it took me to get halfway through writing the post.

I hadn’t published the post yet, so I saved it as a Draft.  For some strange reason insted of deleting the post (that’ll teach me) I decided to make some formatting changes and after one of those changes instead of hitting Save Draft out of habit I clicked on the Publish button.  I immediately realized my error and changed the status of the post from Published to Draft, but I didn’t realize that I needed to click another button, Update, in order to change the post back from Published to Draft.  So unbeknownst to me the post was still sitting out there for all of the pro-Israel right-wing to see, and call me a fool.

Ah yes, good times. And it seems Silverstein has not learned much in the past three years.

Just after the rockets stopped falling on Sderot, Ashdod and Tel Aviv last November, another bomb exploded a week later in Hollywood. Judging from Twitter the day after its premiere, the Lifetime made-for-TV movie “Liz and Dick,” starring Lindsay Lohan as screen legend Elizabeth Taylor, felt as urgent, significant and tragic as the war in Gaza.

Lohan is the successful child star who segued into teen hits and looked poised for a pretty decent career until she suddenly took a detour and became America’s Favorite Train Wreck, imploding spectacularly in full public view and with half a dozen mug shots to prove it. The Liz Taylor role was supposed to be her comeback, embodying the serious, complicated and glamorous actress she herself hoped to be.

Instead, it was a belly flop of epic proportions, one of the most maligned performances of the year, with critics and audiences seeming to take delicious pleasure it its total failure. Lohan was reportedly devastated by the reviews. But that hasn’t stopped her from continuing her quest to channel the Elizabeth Taylor deep inside her.

Last week was the anniversary of Taylor’s conversion to Judaism, at age 27. In an effort to hold onto Taylor’s spirit, or perhaps to convince the skeptical public that she really can portray the Hollywood icon, Lohan announced her conversion to Judaism today, to take effect this July when Lohan herself turns 27.

Perhaps in preparation for the big switch, last week Lohan was caught smooching with the new guy in her life, Avi Snow, an American-Israeli musician, who has since confirmed his relationship with the actress. Snow is the second Israeli to be romantically linked to Lohan, after Eilat Anschel in 2010.

Taylor famously took a Hebrew name after her conversion – Elisheba Rachel. A source close to Lohan said she really wanted to be Esther but, “Madonna took it first… which is kinda unfair because Madonna never officially converted.” Other names reportedly in consideration are Naomi Ruth (“Lindsay was inspired by the Biblical girl-girl love,” said the source) and Jezebel (“Because she thinks it sounds fetch”).

The rabbi overseeing the conversion, who wishes to remain anonymous, says that after working with Lohan for nine months to understand various Jewish teachings, he ultimately threw up his hands and told her to “just stand on one foot and let’s get it over with.”

He also had this to add: “Happy April Fool’s Day.”

Enter Silverstein, who tweeted this:

When informed this was a prank story, Silverstein pulled another laughable excuse out of his knickerbockers. 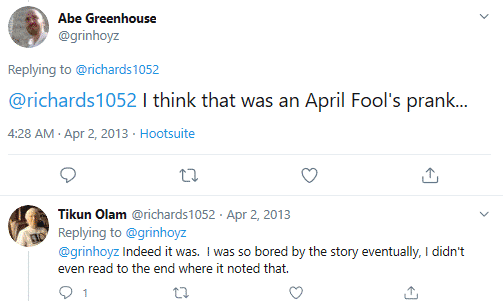 Update: For the record, Abe Greenhouse – Silverstein’s tweet buddy – is this joker.

Update: Silverstein also posted the story on Facebook, and offers a different excuse.