It was a difficult day. The gruesome murder of Hallel Yaffa Ariel sat heavy and aching on the hearts and minds of the people of Israel. But there is a general principle that a joyous event is never postponed on account of a sad one. And so it was that the two-year anniversary celebration for Oz VeGaon, went ahead as planned.

Organized by Women in Green and grassroots supporters and residents of Gush Etzion, the event, like most Jewish events, was brimming with emotion. Gratitude, joy, sorrow, grief, determination, love, caring, and a feeling of connectedness were all there. The parents of the three boys (Eyal Yifrach, Gil-Ad Sha’er and Naftali Frenkel)were there, too.

After all, the creation of Oz VeGaon as an active tourist center was a direct response to the murder of the three boys. Because when Jews are murdered because they are Jews, the Jewish response is to build, build, build, and have babies. Lots of them.

By the way, in case you haven’t figured it out, the name, Oz VeGaon, is an acronym containing the names of the three boys.

Two indefatigable ladies, Yehudit Katsover and Nadia Matar, the driving force behind the founding of Oz VeGaon, acted as MC’s for the event, introducing the speakers and giving out miniature wooden benches to those who helped make the tourist center happen.

Ori Yifrach, father of Eyal (May Hashem avenge his blood), was the first of the three parents to speak. My impression was of a man who will probably never come to grips with the searing pain of losing a son in the most horrid way possible. His hands shook and grief was plain on his face for all of us to see. In fact, he told us so. “We feel deep pain every second of every day,” he said.

I believed him. I could see it, hear it, feel it.

Still, he said, “We all have strengths that help us along the way.”

One of the things that helped strengthen Ori Yifrach, was the creation of Oz VeGaon, the building of which he referred to as  a “chance to refresh the soul” from its constant pain. Because when you lose someone like that, it brings comfort to see something good come out of the loss. Oz VeGaon is that something good, something tangible, a permanent presence to keep the memory of the boys and their families, and the unity of our people in the wake of the tragedy, alive in all our minds.

Ori Yifrach said that Oz VeGaon turned the Gush Etzion Junction, where the triple tragedy happened, from a place of sadness and pain to a place of “hope and faith.” Yifrach ended his remarks by saying, “We won’t be broken, but will continue on!”

Bat Galim Shaer, mother of Gil-Ad, spoke next. Poised and smiling, she gestured to Nadia and Yehudit, saying, “These two stubborn strong women made this happen. And the most remarkable part of it is the daily effort toward making this place what it is.”

Rachelle Sprecher Frankel, mother of Naftali Frankel, was the final representative of the three families to speak. She called Oz VeGaon, “Chessed Eloki,” a ‘kindness from God.’ Sprecher Frankel referred to the murder of Hallel Yaffa Ariel by borrowing Rina Ariel’s plea to the people of Kiryat Arba

and urging the people of Gush Etzion to “build homes, have a lot of children, and never stop doing good in this, the most beautiful place on earth.”

Rachelle Sprecher Frankel said that the most important thing of all is to show the world that the Gush Etzion Junction is “not a site of death, but a site of life.”

I just loved that.  And I loved that the three families had their young children with them and that there were music and balloons and life. It felt healing, especially after the horrible murder of Hallel, just one day earlier. 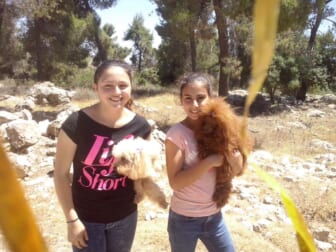 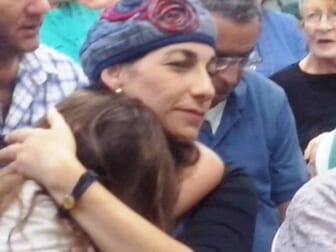 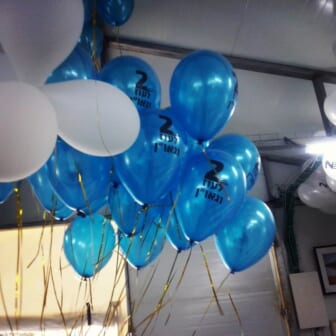 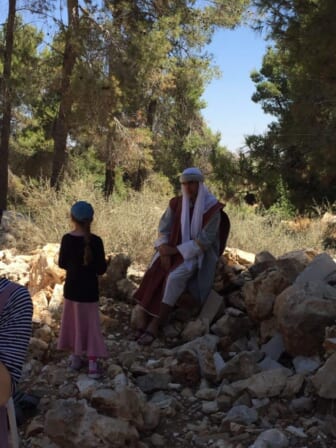 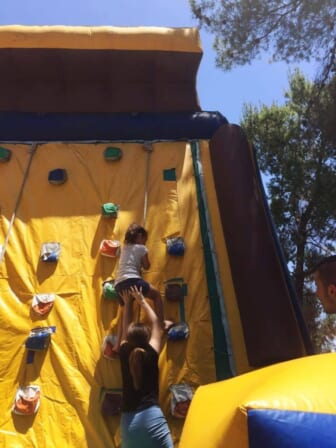 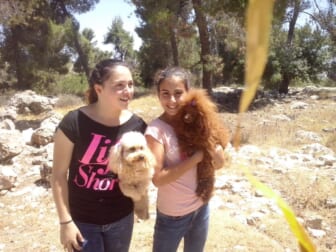 Davidi Perl, Regional Head of Gush Etzion, spoke next, and in fact, spoke beautifully. He spoke of the deep roots of Gush Etzion which they, the terrorists, continue to try to uproot, but instead, “we flower.”

Perl said the Gush Etzion Junction is a symbol of strength, that this place is ours by dint of our merit and national pride, and not as some bone tossed to us out of kindness.

After some live music, we all trooped outside where we were given blue and white helium balloons. We continued past stalls selling wares by local craftspeople, food concession stands, and costumed people there to entertain the children. When we got to the end of the path, the shehechiyanu prayer was recited and we all released the balloons into the air, carrying our blue and white message of pride to the east, in the direction of Jerusalem, the center of our spiritual roots.

It was beautiful and healing, and I thought it was over. But then Ari Goldwag sang for the crowd. A little birdie told me that Goldwag had heard about the event and asked if he could come from Beit Shemesh, to perform there, gratis. Which made his performance all the more moving. As it turned out, he had also organized a flash mob to remember the unity created in the wake of the kidnapping of the three boys, during the days in which all of Israel still hoped they boys would be found alive.

Alas, we sailed from the highest hopes crashing to the most horrible national grief.

But now we were here in this place named after Eyal, Gil-Ad, and Naftali, in the heart of Gush Etzion. It was just one day after Hallel’s murder, and we needed the comfort of growth, life, and hope.  Ari Goldwag sang, the women danced, and I joined them, stumbling a bit over the rocks and thorns that crown this still-wild place I call home.