The International Jazz Festival Musica delle Bocche is held in Santa Teresa Gallura, Italy – or at least it has been until now. But this year’s festival has been cancelled, thanks to the mayor of Santa Teresa Gallura, after the festival’s artistic director revealed himself to be a BDS-hole (auto-translation follows): 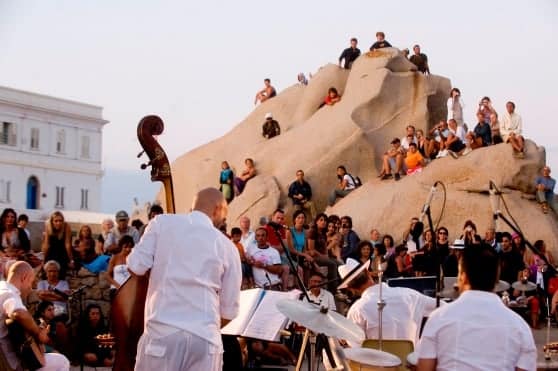 The music festival Musica sui Bocche is in the eye of the storm. Israeli musician Eyal Lerner accuses the Algherese Enzo Favata, the artistic director of the event, which is held every summer in Santa Teresa di Gallura, of having excluded him from the billboard of the next edition because of his Israeli citizenship.

Eyal, with a post on Facebook, admits to having submitted the request for participation late, when the festival program had already been completed. But he adds that Favata in his response, which arrived via email, expressed an openly anti-Israeli prejudice. Lerner obviously took it very badly and, needless to say, his post sparked a real media storm, which also arrived in the room of the mayor of Santa Teresa di Gallura, who yesterday March 7, with a resolution of the council, suspended Musica sui Bocche.

According to Lerner, the artistic director wrote the following to him:

“Good morning. The festival has closed the program. But I must tell you that Musica delle Bocche policy is to boycott any Israeli or Zionist artist because of Israel’s attitude to Gaza and the occupied Palestinian territories.”

Eyal also posted the director’s elaboration to critical commentators (with Eyal’s own comments in caps):

I really think it is practically a great folly to think of myself as an antisemitic racist….I wrote him that really the program of the festival we had closed for some time, but after his further insistence, I also wrote that my personal thought (which I expressed in a private message) was influenced by the facts that I am personally very shaken by the facts in the Middle East and that I was in a personal position against the actions of the Israeli government towards the Palestinians in Gaza. . , so that I had undertaken a personal boycott (BUT IS ITS PRIVATE FESTIVAL?) towards the Government of Israel (continue reading to the end please). Do you remember the movement against apartheid in South Africa? Well then many artists and then others and others still boycotted the actions of a government … not of a people (BUT I AM THE GOVERNMENT?) … or of a religion … simply of a government, and in the end, reason prevailed against the APARTHEID. Today there are many artists and intellectuals who are trying to boycott to make a government think, that’s why I support this action (NO COMMENT)…I have friends and fellow Jews of many nationalities, I appreciate extraordinary Jewish jazz musicians (EVEN IF ARE YOU A ZIONIST?)….This is my attitude only towards the artists promoted by the Israeli government (THINK THAT WE ARE THE RUSSIANS OF STALIN). Let’s consider this my small contribution to the cause of awareness for a real peace between Israel and Palestine. Frankly I will be delighted to host musicians from Israel when there are glimpses of a positive solution to the problem with Gaza and peace will come very soon hopefully.

It certainly sounds to me like a clear case of BDS-holery. I applaud the mayor for taking his stand – here’s hoping there will be a backlash against the creative director, and not the mayor or Eyal Lerner, as a result of the cancellation.

But no matter which way you look at it, this is a big fail for the BDS movement.

In the meantime, if you want to thank the mayor, there are some contact details here.