2020 Presidential hopeful Cory Booker used to be outspoken in his support for Israel. Then he seemingly flip-flopped to become anything but a friend of the Jewish state.

And I suspect there is not going to be any flip-flopping back to the right side. 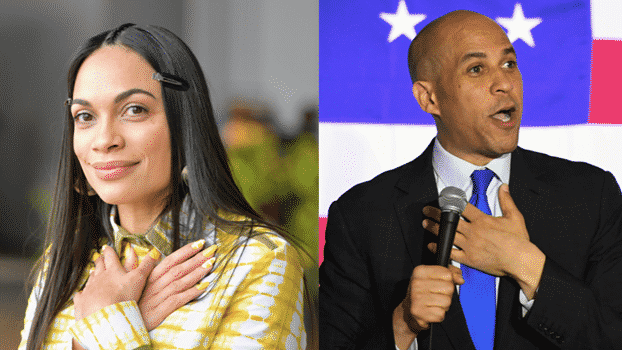 The rumors are true: Rosario Dawson and New Jersey Sen. Cory Booker are a couple.

“Yes, very much so … ,” she said Thursday when quizzed by a TMZ.com videographer about whether they were dating. “So far, so wonderful.”

The “Luke Cage” and “The Defenders” actress, 39, called the Democratic presidential hopeful, 49, “an amazing human being” during the chat at Reagan National Airport in Washington, D.C.

Booker got rumors flowing last month during some radio appearances, including one on “The Breakfast Club” program, where he admitted, “I got a boo,” and he proceeded to tease the hosts about his chances of getting married before the 2020 election.

“There’s two more years until I might fulfill this duty, so give me some time … ,” he said, according to The Source magazine. “I’m dating somebody that’s really special.”

And how is this related to Israel?

It turns out that Rosario Dawson is quite the Israel hater, to the extent she supports BDS against the Jewish state.