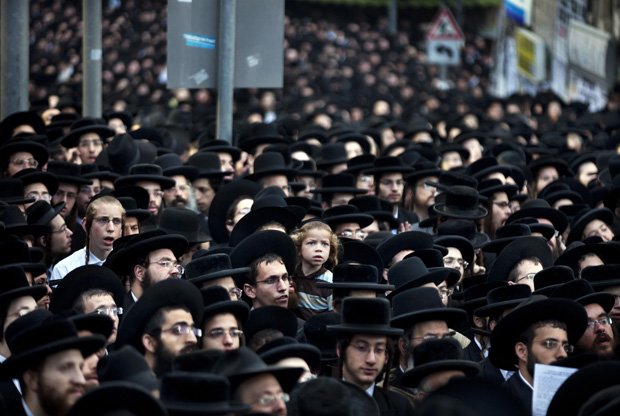 “Anti-Israel”, “Anti-Woman”, “Greedy”, “Lazy”, and “Violent”. These are just some of the stereotypes and generalizations I see casually and liberally tossed around by the Israeli and Diaspora Jewish media in regards to one of Israel’s fastest growing minorities. No, these aren’t said about the Arabs.  They are said about the Haredim (Ultra-Orthodox). As a former Lubavitcher Chassid, and someone who lived in Jerusalem’s Geula neighborhood for over a year of his life, in close personal contact with this much-maligned community, I have to speak up and speak out against the one-sided bias the Haredim face in the mainstream media.

Before confronting the blatant media spin against this diverse group, I need to establish an important fact. The Haredi world is not a monolithic entity, despite what the fear-mongering Israeli press would like us to believe based on their coverage of Shas and United Torah Judaism (the two Haredi political parties in Israel) during the past election. In contrast to the division that these media outlets would like to sow within the Jewish people by turning the Haredim into a convenient scapegoat for Israel’s problems, the Haredi world behind these political entities shows a startling amount of unity. The general public simply doesn’t hear about it, because it doesn’t fit the narrative that casts them as the strange, hostile “other”. Without putting preconceptions aside and speaking to Haredim directly, from a place of respectful curiosity, the average Jew will never hear their side of the story.  The majority of Haredi people simply aren’t interested in engaging with the secular media, and don’t watch television or use most internet sites, for various personal and religious reasons, which should be respected, rather than condemned.

In the densely packed neighborhoods of Mea Shearim, Geula and Mekor Baruch, if one pays close attention to the people as they walk by, one will notice differences in the seemingly identical clothing of the residents. One man will have white socks, one will have black socks. One woman will be wearing a wig and another will be wearing a black headscarf.  One man will be wearing a streimel (fur hat) on a week day, another will be wearing a black fedora. One woman will be wearing what appears to be a stylish, colorful dress and another will be wearing muted, earth tones. Unlike in the secular, and more modern religious worlds, these aren’t personal style choices. These are representative of the unique styles of dress of the dozens of different groups of Haredi Jews. Followers of dozens of different Chassidic dynasties originating in the 18th and 19th centuries in Europe live side by side in these neighborhoods. Some of these groups, like Gur, Belz and Boyan consist of thousands of families, and wield considerable political influence, while other smaller groups may have only a few dozen families. Non-chassidic Haredim who follow the Lithuanian Jewish tradition also inhabit these neighborhoods, along with many Haredi Sefardim. Each and every one of these groups have different communal customs, teachings and approaches to Jewish observance and philosophy, yet to hear the media tell it, they are all simply “Haredim”, with no real distinction.

This dismissal of the rich and unique traditions of these numerous communities also serves to dismiss the remarkable unity they show in their political involvement, despite their stark differences. The fact that so many diverse groups can come together under the banner of two political parties, one for Ashkenazim, and one for Sefardim, is the type of Jewish unity we should all aspire to, even if we don’t agree with the goals they are pursuing. Instead, we see numerous examples of the media jumping to conclusions and publishing one-sided accounts of incidents involving Haredi people meant to stir up ill-will against them.

One such example was the alleged “Haredi plane riot” last November, which was initially reported by many Israeli media outlets as a loathsome display of Haredi contempt for decency. Claims were made that they were rioting, shoving flight attendants and threatening to break into the cockpit upon finding out that their plane would land in Israel after Shabbat had already begun. Because Haredim are generally not active on the internet or published in mainstream media sources, it wasn’t until after Shabbat, that several of the more modern religious passengers were able to set the record straight. By that point, the damage had largely already been done in the eyes of the public, despite the testimony of several passengers, including a former Knesset Member, and also a public statement by the CEO of El Al, who acknowledged that no violence took place. All the religious passengers wanted was to be let off the plane, which had been delayed, rather than fly late and desecrate Shabbat. The pilot, despite claiming he would return to the terminal to accommodate them, instead took off, showing a total disregard for the religious needs of the passengers, even though the delay was the fault of the airline. The flight was eventually diverted to Athens, Greece, where the religious passengers made last-minute Shabbat arrangements.  While they were observing their surprise Shabbat in Greece, the non-Shabbat observant passengers, some of whom were aggravated at having their own flights delayed further, submitted one-sided and falsified reports to the secular Israeli media.

This type of spin is rampant and serves only to prevent bridges from being built between the Haredi world and the rest of Israeli society. There are legitimate debates to be had, such as whether or not the Haredi people should be drafted, or the nature of public transportation on Shabbat, but the mudslinging and slander does not help clarify these discussions. There are so many misconceptions about the Haredi community in Israel that need to be debunked, and very few people willing to stand up and do so. The first and biggest of these misconceptions is that the Haredim don’t want to build these bridges.  Unless those of us who are familiar with their world start to speak out, the divide between secular and Haredi society will continue to widen, and we will all suffer as a result.