The American Jewish community has been rocked by antisemitism in the past week.  A shooting at a Chabad synagogue, and not one, but now two antisemitic political cartoons.  The anger among the Jewish world has been palpable, and frankly, it’s about time. There has been a blatant rise in antisemitic/anti-Israel attacks (“anti-Israel” is more often than not just code for anti-Jewish) in both America and in Europe and frankly, up until now, the tepid responses from Jewish people and alleged “leadership” have been not only ineffective, but embarrassing. We make just enough waves to get a canned, bogus apology, and, content that we made a real difference, we go back to whatever other preoccupation we were engaged in that made us miss most of the antisemitism in the first place.

Not this time though.  Fortunately, this time, the Nazi imagery coupled with a prestigious name like The New York Times lit a fire under activists, culminating in what looked to be a relatively well-manned protest outside their offices yesterday.  It would appear that finally, people have decided to take real physical action instead of merely writing angry letters and donating extra money to their local do-nothing Jewish Federation.  There was a major problem on display though based on the pictures of the protest. This is a long-term problem, and it will hamper future efforts to fight antisemitism and support Israel at meaningful level.  The lack of young people.

From the pictures that have been made available to the public thus far, I’m sad to say, Jews everywhere are in trouble.  Not only from antisemitism, but from a demographic disaster of our own making. We have lost the American youth. In a city with over one million Jews, there should have been thousands, even tens of thousands of people at this protest.  Instead there appeared to be less than five hundred. And the most striking aspect, and the most concerning to me, was that (with all due respect to friends of mine that were there fighting the good fight) I was looking at a sea of mostly gray and white hair.

Where were the young people? Where were the college students? Where were the Israel advocates? This protest was at 5:30 PM, plenty of them were out of work, out of class, able to stop by on their way home.  Why is it that when its time to protest against Israel for trumped-up charges of genocide and oppression, we see huge numbers of young Jews.  When it is time to protest against President Trump, we see huge numbers of young Jews.  We see (and hear) loud Jews vocally proclaiming their Jewishness in support of causes that negatively impact their own people. They are Jews who have no sense of history or appreciation for what Israel means, and how deadly antisemitism is. We had the opportunity to teach them these things, and instill in them the desire to turn the passion of youth towards things that help their people and thereby make the world as a whole better but we failed. 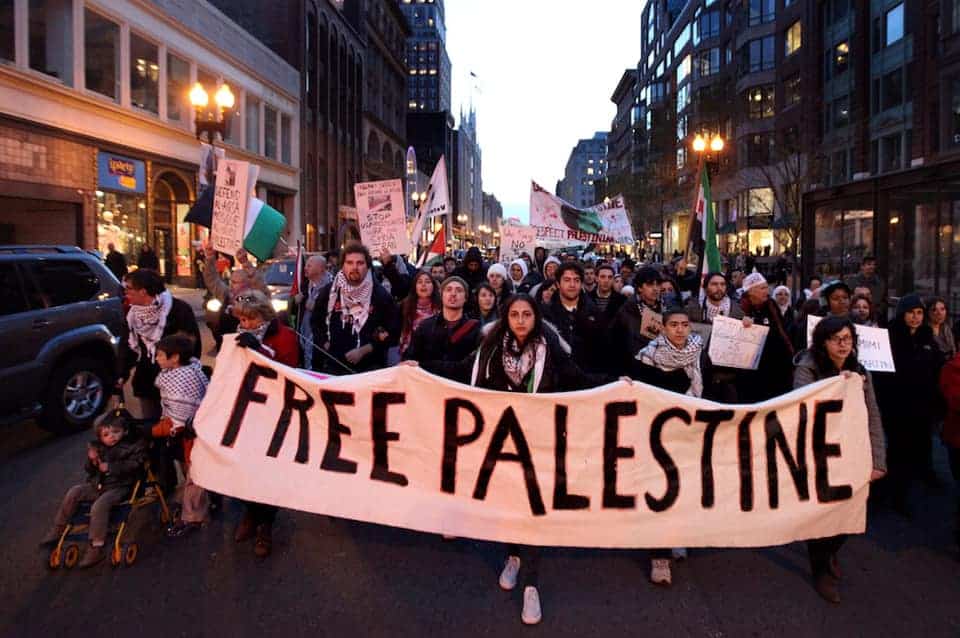 We failed to teach them, and as a result of that failure, we lost those Jews. We lost them to apathy. Not general apathy of the type stereo-typically associated with the youth, but with apathy towards their own heritage, turning it into a tool to be trotted out for political capital rather than a source of personal pride and purpose. We chose baseball practice and piano lessons over Hebrew School. We sent our kids to Jewish summer camps that have nothing to do with being Jewish for fear of excluding someone. We allowed our comfort in America, our belief that “it can’t happen here” to make us complacent, and we downloaded that complacency onto our children.  We have placed our Americanness over our Jewishness and in doing so, we have raised good Americans, but we have raised profoundly ignorant Jews.

True, there are young Jews that do tremendous work on behalf of Israel, advocating strongly for the Jewish State that should be a guarantee that “Never Again” is more than just a hackneyed phrase, but they are the clear minority at this point. We need to do better, people.  If we want our children and grandchildren to care enough about their people to put down their phones, turn off their Playstations and engage with their own heritage, we must do better. It starts with education. When we put all our eggs in the Holocaust education basket, we end up with Jews who say “Woe to be a Jew” rather than “Thank God for making me a Jew”. We end up with a depressed, beaten down group of kids who feel like it would be better to hitch their wagon to any group other than the Jews, particularly when they see the usually soft, hand wringing responses of Jewish leadership when Jews are publicly attacked. Of course we must educate our children about the Holocaust. How else will they come to understand the price of complacency, or to see the signs of trouble on the horizon, such as the New York Times cartoon? The stories of sorrow have to be balanced out with the tales of glory, because no one wants to grow up hearing about how miserable it has been for their people. That won’t inspire any kind of fervor, passion or even interest in most kids, and they will grow up to be the apathetic young adults who are so often missing from the Jewish community. The answer to this education crisis lies with Israel.

Teach your children about Israeli courage, because in the same decade that we were being herded into boxcars at gun point and shipped off to die in Auschwitz, we were freeing our ancestral homeland from the British Empire, fighting off Arab armies at odds of 10-1 and making our little desert into the paradise that it is today as gutsy pioneers. We have thousands of years of rich culture and vibrant history, we are one of the oldest nations on Earth. Unlike the ancient Assyrians, and Babylonians and Romans, we are still here, and what’s more, we’ve come home! Give your children something to be proud of.  Make them feel like they are a link in a great, golden chain, rather than a burdened member of a cursed people and I promise you, that if, God forbid, we have to protest again, the average age will be thirty instead of fifty.