Home Chaim Lessons from a Holocaust Hero: The Kaliver Rebbe

Today is Yom HaShoah, Holocaust Remembrance Day. It is a day on which we solemnly recall and remember the six million Jews who were savagely taken from us by one of the greatest evils in history. The Nazis were so evil, so horrendously vicious and methodical in their murder of our people that “Nazi” has become a synonym of evil in dozens of languages. 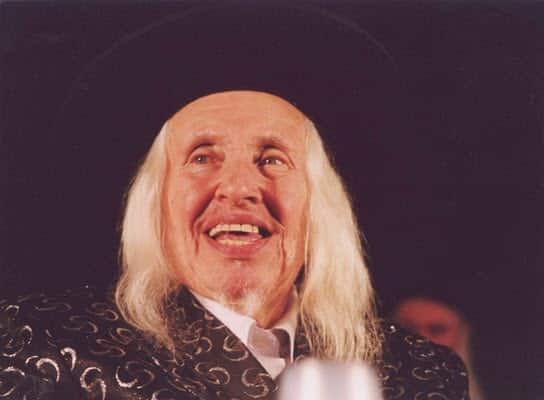 This week, the Jewish people also mourn one particular survivor who passed away. His name was Rabbi Menachem Mendel Taub, the Kaliver Rebbe, and from him and the way he lived his life after the Holocaust, we can learn precisely how to honor and do justice to our hallowed dead.

Rabbi Menachem Mendel Taub was born in Transylvania, Romania in 1923, into a prominent chassidic family. He was a direct descendant of Rabbi Yitzhak of Kaliv, a student of the renowned chassidic Rebbe, Elimelech of Lizhensk. With a family background like this, great things were expected of young Menachem Mendel. He had a normal life, as far as far as future chassidic Rebbes are concerned, marrying his wife Chana Sarah Shapiro shortly before the outbreak of World War II. Then, in 1939, the world exploded in a storm of lead and fire, and the future Kaliver Rebbe’s life took a terrifying turn.

The Nazi war machine quickly ripped through Eastern Europe and in 1941, the murderous  Romanian dictator, Ion Antonescu joined in an unholy alliance with the Axis powers.  Immediately upon entering the war, Antonescu began pogroms against the Jews of Romania with the help of Hitler’s Einsatzgruppen (special units dedicated to the slaughter of Jews in Eastern Europe. In the first few years of the war, the massacres were primarily carried out by roving death squads and Romanian pogroms, but by 1943, plans for mass deportation to the death camps had been solidified. Two of those deported were Rabbi Taub and his wife Chana, who in 1944 were sent to Auschwitz. Upon arrival at Auschwitz, the two were separated, and the worst part of the nightmare began.

In Auschwitz, Rabbi Taub was selected for one of the most horrific and brutal experiences any Jew could expect to encounter during the entirety of the Holocaust. He was singled out for and subjected to the “medical” experiments of the “Doctor of Death”, Josef Mengele.  Mengele’s experiments on Jews were ghoulish. Vivisections, forced infections, unnecessary amputations and other horrors were the standard, and while under Mengele’s “care”, the Rebbe fared little better. He was subjected to experiments related to chemical burns, which accounted for two notable features later in his life. The first, was his distinctive appearance. Unlike other chassidic Rebbes for whom wearing a beard is standard, the Kaliver Rebbe never had a beard. Not because he didn’t want to, but because Mengele experimented with chemical burns all over his body, including his face, making it impossible for him to do so.  The second and more tragic was that he was thenceforth unable to have children, the ministrations of Mengele left him sterile. He was later transferred to the Breslau concentration camp, and afterwards to Bergen-Belsen.

As the war came to a close, and the Allied armies were approaching the camps, Hitler’s SS troops (Schutzstaffel, his elite troops, the most dedicated to Nazi ideology) began to accelerate their “liquidation” of the Jews, determined to carry out The Final Solution, despite their imminent defeat. Rabbi Taub watched as the SS troops shot Jew after Jew, throwing them into a raging fire, whether they had died from the gunshot wounds or not. He recounts that during that incident, he was selected for execution, and cried out with “Shema Yisrael”, pleading to God for his life. For some reason, the Nazis let him live, and he vowed to dedicate his life to publicizing and promoting the memories of those who were killed. The camps were eventually liberated, and Rabbi Taub was reunited with his wife, Chana, who had also miraculously survived. They first moved to Cleveland, Ohio, and eventually, to Israel, the Holy Land in 1962.

Rabbi Menachem Mendel Taub, the Rebbe of Kaliv devoted the entire rest of his life to speaking about the Shoah, about the fallen, and about his own nightmare. He spoke to world leaders, famously addressing each incoming US president, regardless of their political platform. He wrote several books dedicated to teaching about the Holocaust and the stories of heroism that he witnessed in the camps and gathered from other survivors. Rabbi Taub was one of the most outspoken leaders in the religious world regarding the Holocaust, but his message was not only about the horrors that were, but also about the hope that can be. He inspired Jewish people with his words to look forward and to draw strength from the memories and courage of those who faced certain death, but clung to their Jewishness anyway. He showed other survivors that there was still light and hope in the world, frequently raising his voice in song and bringing them to tears, not of sorrow but of gratitude. From the Kaliver Rebbe, we can all learn a powerful and valuable lesson.

Every year, Jews and gentiles around the world take this day, Yom HaShoah, to remember and commemorate the great evil that was done to the Children of Israel. In the morning, all of Israel stops wherever they are, even in the middle of the street, or driving on the highway, and stands in silence. People share stories of their experiences, or of their parents and grandparents. We remember, and we reflect.  This day cannot only be for looking back, it must also be a day for looking forward. It must be a day on which we commit ourselves to strengthening the Jewish future. We must not only ensure that what happened in the 30s and 40s can never happen again, but also that those who were stolen from us did not die for nothing. Take time to teach your children not only about those we lost, but about why being Jewish matters, why we need a strong, united Jewish State, and commit to doing one extra mitzvah in the merit of those who were killed. The victims of Hitler would have given anything for one more chance to live as Jews, to see the rebirth of Israel, or to even say the words of the Shema. They can no longer do so, but we can commit to doing it for them. As we have learned from the way Rabbi Menachem Mendel Taub, the Rebbe of Kaliv, chose to live his life, their memories deserve nothing less.