The Irish Boycott Movement: Loud and Brash, But Not So Powerful

Since Israel won last year’s Eurovision Song Contest, the Ireland Palestine Solidarity Campaign (IPSC) and Sadaka Ireland have been engaged in a loud and aggressive campaign to boycott the competition. While we all know the boycott movement is an international campaign by “Palestinian Civil Society” we should also know that those who support the boycott in Ireland would dearly love to see Ireland getting douze points for being the first, or indeed the ONLY participating country to boycott Eurovision in Tel Aviv.

They are failing miserably.

Two recent online polls clearly show the majority of Irish people do not support a boycott of the Eurovision Song Contest in Israel this year, and judging by the reaction of a recent TV audience in Dublin, those who oppose a boycott are not just online. 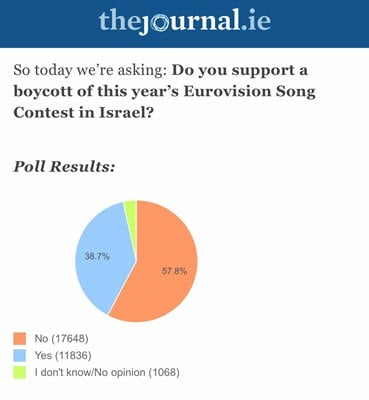 Should Ireland boycott the Eurovision Song Contest taking place next month in Israel? #Eurovision2019 @ciarakellydoc wants to YOUR view.

On last Friday night’s edition of the Late Late Show, a light entertainment TV programme on Ireland’s national broadcaster RTÉ1, actor Rory Cowan, who signed both the Ireland Israel Alliance and Creative Community for Peace’s open letters in support of the Eurovision, was invited onto the show. As far as Rory was concerned, it was to be a light-hearted discussion with previous Eurovision winner Linda Martin and broadcaster Marty Whelan, followed by Sarah McTernan singing Ireland’s entry, the catchy “22”.

The IPSC responded furiously in a Facebook post late Friday afternoon, accusing RTÉ of “extreme bias” and calling Rory out as a “propagandist for Israel’s apartheid regime.”

Hours before Rory was due to appear, the actor learned the panel had been dramatically overhauled and Linda Martin would be replaced by singer and boycott supporter Mary Coughlan. Astonishingly, Coughlan was allowed to READ a prepared statement, unchallenged and without context, in which she claimed that during the first months of 2018 “57 children between the ages of newborn and two were killed [by Israel].”

Coughlan then went on to make the outrageous claim that according to The Jerusalem Post “70% of children detained [by Israel] were threatened with rape and castration.” What she failed to mention was that she was quoting from a PLO Report released to correspond with Prisoners’ Day, and not simply a Jerusalem Post editorial. When Rory brought that fact up, he was quickly silenced by host Ryan Tubridy. Mmmmm, things might get a bit sticky here!

In attempting to justify her “Israeli artwashing” claim, Coughlan was caught out in another lie when she again referred to her typed-up statement and claimed that former director general of the Israeli Foreign Ministry, Nissim Ben Shitrit, “has just said” that “We see culture as a propaganda tool of the first rank…” Really? Check your facts lady!

The boycott movement in Ireland, while loud and brash, is not as powerful as they would like to think. If Mary Coughlan et al were expecting applause for what amounted to the reading out of vicious lies and propaganda, they were sorely disappointed.  It was Rory Cowan who received the applause, before Sarah McTernan took to the stage with her song for Ireland.

Jackie Goodall is the Director of the Ireland Israel Alliance