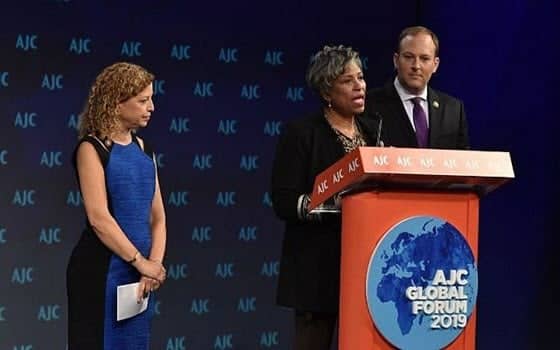 Three black and two Jewish members of the U.S. House of Representatives from both parties launched a black-Jewish caucus.

The caucus, launched after meeting convened by the American Jewish Committee in January, will work to bring blacks and Jews together to back hate crimes legislation and combat white supremacist ideology and actions.

White supremacists carried out two lethal attacks on synagogues since last October, in Pittsburgh and in Poway, California.

“The African-American and Jewish communities have a history of standing together for the promotion of social justice and civil rights,” Rep. Brenda Lawrence, D-Mich., said Monday at the AJC’s annual Global Forum here. “To encourage and nurture this unique partnership, I have formed the Congressional Caucus on Black-Jewish Relations with the hopes of strengthening the trust and advancing our issues in a collective manner.”

Anti-Zionist-not-antisemite Linda Sarsour, who sees herself as an anti-racism campaigner has welcomed this wonderful, bipartisan initiative.

Just kidding. This Gaslighter-in-Chief has launched into a tweet and retweet storm, attacking the Jewish Lee Zeldin as a “White nationalist” and racist himself.

I should point out there is not one tweet applauding the idea behind the caucus, even if she hates Lee Zeldin. That is because she detests this new initiative, which threatens to derail all the hard work she has put into further fracturing Black-Jewish relations.

But she’s clearly not antisemitic because some of her best friends (retweeted above) are Jewish.