Last month, I posted a video in which Chief Palestinian Propagandist Saeb Erekat claimed Former Israeli PM Ehud Olmert offered the palestinians more than the 1967 liberated territories, as well as a “return” of palestinian refugees to Israel.

After someone tweeted out the video to show the palestinian leadership’s intransigence, Erekat responded with this:

We also already know that Abbas rejected the deal, partly because he wanted millions of “refugees” to return. I doubt even Olmert would have been stupid enough to agree to this. And Abbas himself claimed that a peace deal might have been reached had negotiations continued for four to five months. Clearly, even he would not agree with Erekat’s claim of a definite peace deal in two months.

In other words, Erekat is showing yet again just how full of sh*t he is. It is no wonder he regularly looks constipated. 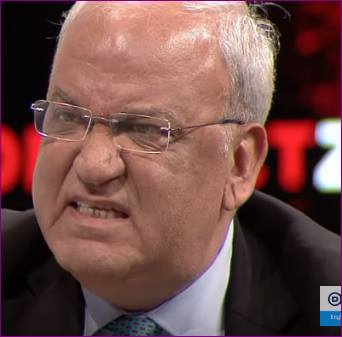