As an opinion editor at the despicable rag The Forward, Batya Ungar-Sargon has shown herself to be no friend of Israel. In fact, I have called her out for minimizing some pretty vile antisemitism.

Now it seems she has learned the hard way that hatred of Israel is used as a way to mask real Jew hatred, after her experience as moderator of a session on racism and anti-Semitism at Bard College’s Hannah Arendt Center. 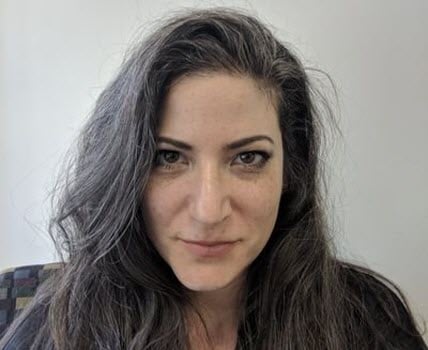 When the conference began Thursday morning, I was warned that protesters from the Bard chapter of Students for Justice in Palestine planned to interrupt my panel with Wisse and Mor. I was surprised they were not targeting the one on Zionism, but the one on anti-Semitism, the only panel of about 20 over the course of the two-day program where three Jews would be discussing the topic.

“But we’re not even talking about Israel,” I said to the conference organizers. “How does that make sense?”

As the protesters started to gather in the lobby, I approached them. I told them that I respected their passion and commitment to what they thought was right, but asked why they had picked this panel.

“Come to my panel tomorrow,” I said. “Come protest my comments on Zionism. I’ll be talking about the occupation. Bring your signs.”

I told them I’d reserve the first and second audience-questions for members of their group, but that protesting the all-Jewish anti-Semitism panel was undercutting their work.

Apparently, so do some Bard students.

I started to respond, but was beat to it by member of my panel on Zionism and racism, Shahanna McKinney-Baldon, who was, astoundingly, encouraging them.

“I disagree with what she is saying,” she told them. “I support what you’re doing. I think you should protest.”

I was shocked that someone the Hannah Arendt Center had invited to discuss racism and anti-Semitism was actually egging on what was a blatantly anti-Semitic protest. But she would not be the only one.

When the protesters proceeded to interrupt Wisse, they were applauded by several of our fellow conference speakers in the audience. These vaunted intellectuals, flown in from across the country to discuss racism, were commending a display of racism against Jews.

This was much more horrifying than the students’ chanting and leafletting, which failed to stop the indomitable Wisse from having her say, defining anti-Semitism as any political organizing against Jews (I have been told since that two students were removed, something I didn’t see from the stage, but the rest stayed). Not one of our fellow conference speakers got up and exercised their free speech rights to call the protest what it was. Not one came over to us after to express shock and horror that three Jews would be denounced for Israel’s actions while attempting to discuss anti-Semitism in America.

But not one of my fellow speakers said a word. Two days later, I have not received a single note acknowledging what happened, which leaves me thinking they condone it.

And some were explicit about it. At a party for conference speakers at Berkowitz’s house right after the panel, Etienne Balibar, a French philosopher currently teaching at Columbia University, told me he thought the protest was wonderful.

“Why are you silencing Palestinians?” he demanded. “There should have been a Palestinian discussing anti-Semitism. They have many thoughts about it!”

I left the party. How could I drink with people like that? And back at my hotel, I realized that it would be pointless to participate in Friday’s program. There is no debate possible when people think anti-Semitism is not only acceptable, but commendable.

I can’t believe I am saying this about an article in The Forward, but read the whole thing.

and again during the Q&A

Note the inappropriateness of the protest during such a discussion. There is no question it was a manifestation of antisemitism.

And here are Ungar-Sargon’s comments before a different panel the next day.

Now having read and seen all of this, please tell me that Linda Sarsour is not a despicable, gas-lighting Jew hater? 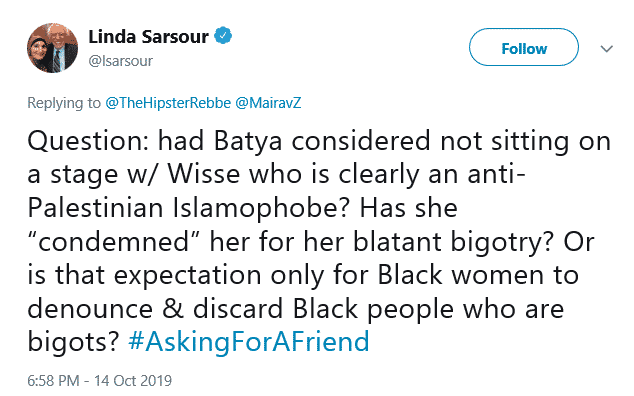