After radio silence the past few days while it was actually happening, Democrat Presidential candidate Bernie Sanders has tweeted out a  belated statement on the Gazan rocket fire on Israelis. And it is as morally bankrupt as you’d expect from the guy who loves hangin’ with Linda Sarsour, Rashida Tlaib, Ilhan Omar, and company.

No actual condemnation of the targeting of Israeli civilians with hundreds of rockets – just a limp statement that “we shouldn’t have to live in fear of rocket fire”, followed immediately by a similar statement regarding palestinians living under “occupation.”

It looks even worse when compared to statements made by his fellow Democrats (which are also a vast improvement on the boilerplate Obama administration, “even-handed” responses)

I strongly condemn the rocket attacks on the citizens of southern and central Israel. Israel has a right to defend itself against acts of terror that set back any progress towards peace and will only serve to inflame the humanitarian situation in Gaza.

Rocket attacks on Israel continue. My thoughts are with those living in fear and terror because of these attacks. The United States must continue to support Israel’s security.

Israel has a right to defend itself against terrorist threats. It is intolerable that Israeli civilians live their lives under the constant fear of rocket attacks. That's why our administration was such a strong supporter of Israel's life-saving Iron Dome. https://t.co/aQOUdKZqq7

And no tweet from Sen. Kamala Harris, but she did say this:

“The latest barrage of rocket attacks from Gaza on innocent Israelis cannot be tolerated—Israel has the right to defend itself from these horrific attacks. I join others in urging against further escalation. I strongly support funding of the Iron Dome missile-defense system, which is, once again, saving countless Israeli lives.”

Despite Bernie’s anything but “pro-Israel” response, he has not been feeling the love from those of his supporters who also happen to be Israel haters and antisemites (which is unfortunately a hell of a lot). Here’s just a sample: 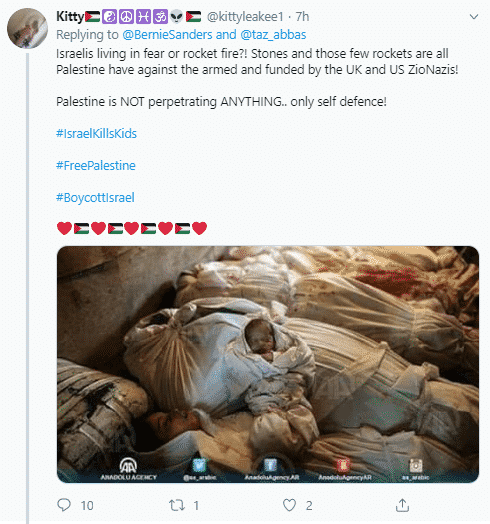 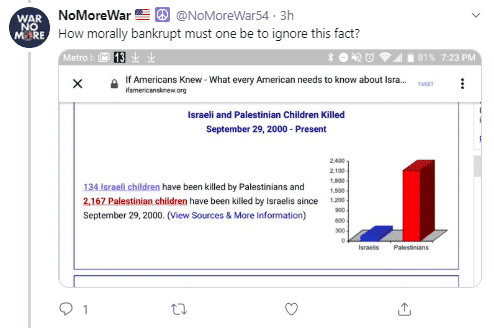 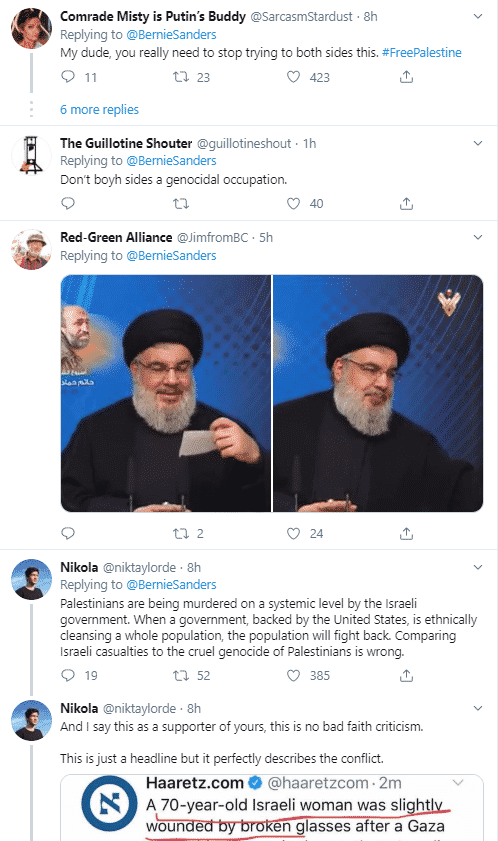 Oh, and it includes this from his bestie

Yup, even a hint of empathy for Israeli civilians and their standards are not met – which just goes to show the kinds of dogs with whom he has lain down.

He’ll most certainly get up with fleas, which is fine with me – as long as he doesn’t get up and become President of the United States one day.

Update: Elizabeth Warren’s tweet on the situation was Bernie-esque, and she has been subject to the same types of responses

I welcome the Gaza ceasefire. Dozens were killed in Gaza, and hundreds of rockets fired at Israel. We must work to end rocket attacks on Israel, eliminate the Gaza blockade, and solve the humanitarian crisis so that all Israelis and Palestinians live in security and freedom.