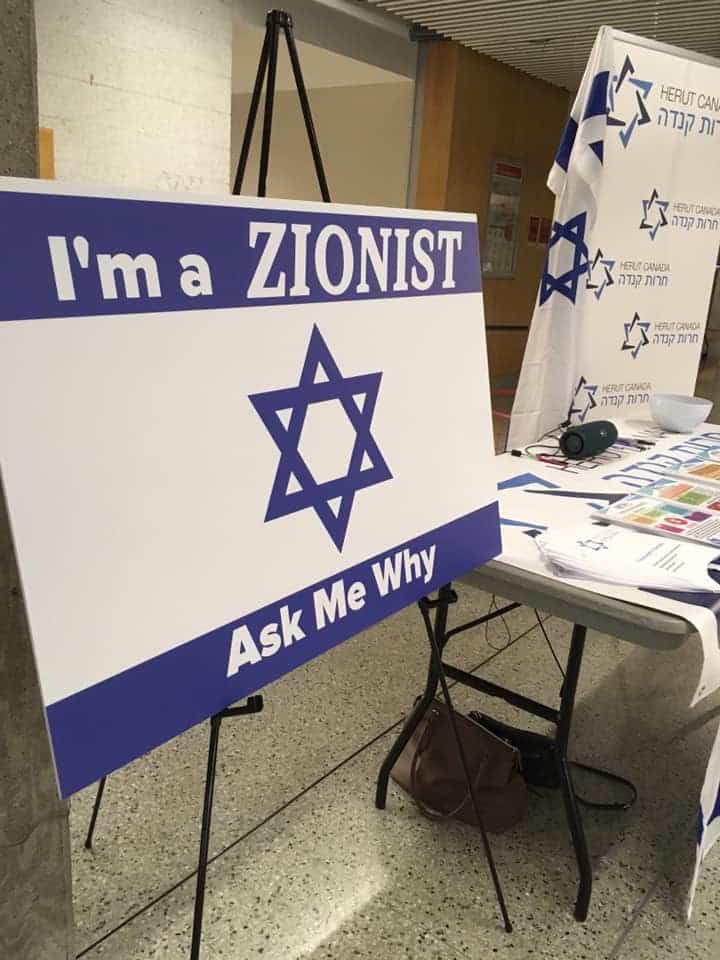 York University has a long history of blatant antisemitism on campus. For starters, they’re known for the extremely problematic mural that they refused to remove for many years, that glorified Palestinian violence against Israelis. York was one of the first universities in Canada to adopt BDS, and has a strong and loud contingent of anti-Israel students.

This past year has been particularly egregious, with the new “unapologetically” pro-Israel group Herut Canada frequently having their events disrupted on campus.

This morning, I received a tip about a post from Lauren Isaacs, the former outreach coordinator of Hasbara Fellowships Canada and Director of Herut Canada, which has a branch at York University in Toronto.

A longtime supporter and member of the Herut Movement myself, I know it to be unapologetically, brazenly pro-Israel, but also dedicated to social justice, in the actual sense of the word. Herut fights for Israel around the world, including our rights to Judea and Samaria, in addition to campaigning for social justice within Israel. This mission includes combating racism, gender inequality, and anti-LGBT discrimination, and supporting religious freedom. They are far from the radical right wing group York seems to think they are.

The movement is aligned with one of Israel’s “founding fathers,“ Zeev Jabotinsky, not the controversial Rabbi Meir Kahane, which this article seems to imply – despite the fact that the chairman of Herut UK called him a “violent extremist”. The reason for this misconception is because the chairman of Herut UK, in an informal radio interview that reflected his own opinions and not the opinions of World Herut, called him a “visionary” in his idea that the two state solution wasn’t going to work, not because he supported Meir Kahane. Herut UK launched in 2018 and in 2019, the global organization made inroads in the US and Canada. My assumption is that this incident had something to do with what happened at York University in Toronto – a university teeming with anti-Israel sentiment, whose student government has a history of finding any excuse whatsoever to combat pro-Israel activity – suspending the university’s branch of Herut Canada yesterday, according to Herut Canada director Lauren Isaacs, “for no reason.”

This action occurred in the backdrop of the university refusing to do anything about the shouting down of IDF veterans’ group Reservists on Duty, during their attempt to inform students on what really goes on in the Palestinian Territories, and debunk common myths about the IDF.

Right on the heels of this event, the York Federation of Students passed a motion banning Israelis from speaking on campus. Yes, you heard that right: discrimination on the basis of national origin. And unlike McGill, they don’t have a Judicial Board to overturn it.

Just as they did at McGill, York University’s Administration condemned the decision, but it was too little, too late.

And last night, just a week later, Herut Canada was suspended without a stated cause, although it’s pretty clear what the cause was: retroactively violating the motion that was passed last week, by having Israeli reservists speak two weeks prior.

This was the kind of “tabling” by Herut Canada at York that was banned:

Then, YFS banned the use of the term Zionism in public tabling:

as these tabling events led to a violent backlash:

Unfortunately, there was no happy ending. In an attempt to “play fair,” both the virulently anti-Israel Students Against Israel Apartheid, and Herut Canada, were banned from campus. Needless to say, in an attempt to “keep the peace”, the university stifled free speech and dialogue.