Home Aussie Dave Terror Promoter Janna Jihad Gets Scolded By Some of Own Supporters For...

Young terror promoter (the aptly named) Janna Jihad – who is also the cousin of ‘Shirley Temper’ Ahed Tamimi, and related to Sbarro terrorist Ahlam Tamimi – posted this photo and text on Facebook a few days ago: 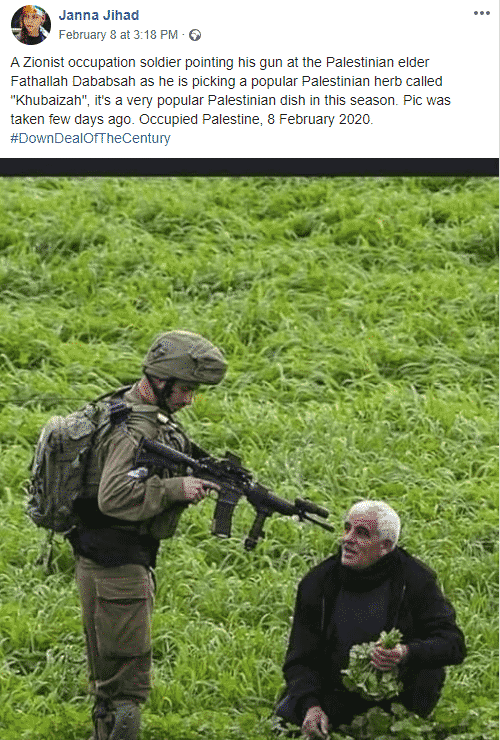 Other Israel-haters on social media posted something similar.

Naturally, it is a lie, yet another example of the types of optical illusions the palestinian propaganda industry has a penchant for exploiting. We have seen it time and again.

Note how the soldier is standing in the foreground, in front of the man, at 90 degrees to the photographer, with his rifle held out in front of him. His finger is not on the trigger and he is not even looking at the man, but rather seemingly the ground or herbs being picked. More importantly, the man himself seems very calm and relaxed.

Tellingly, some of Janna Jihad’s own supporters have taken her to task for spreading this fake news.

I strongly suspect these same people would readily accept other (less obvious) libels against the Jewish state. Alas, this one was too obvious even for them, and their concern seems to be harm to their “cause.”