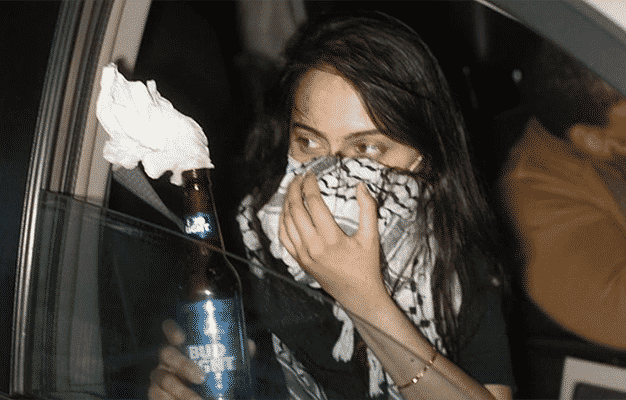 Remember Urooj Rahman, the Israel-hating human rights lawyer who brought some palestinian tactics to Brooklyn when she hurled a Molotov cocktail in to a police cruiser while wearing a keffiyeh over her face?

Her good friend has helped her secure bail – a former Obama Intelligence official who shares her friend’s rabid hatred of the Jewish state (hat tip: Lorraine).

A former Obama administration intelligence official who worked in both the Departments of State and Defense has guaranteed bail for a human rights lawyer accused of firebombing a police vehicle in New York City.

The former official, Salmah Rizvi, told a judge the alleged firebomber is her “best friend.” Rizvi, now an attorney at the D.C.-based law firm Ropes & Gray, helped secure the release of fellow lawyer Urooj Rahman by agreeing to be a suretor for her bail. That means Rizvi is liable for the full cost of the $250,000 bail if Rahman fails to obey the court’s orders.

Rahman was released to home confinement over the objections of government attorneys after her arrest on Saturday for throwing a lit Molotov cocktail through the window of an NYPD vehicle.

U.S. District Judge Margo Brodie acknowledged the strong evidence against Rahman, who was also accused of distributing the incendiary devices to other rioters, but agreed to grant her bail due to the “willingness of family and friends to sign on as suretors,” according to a report from Law360.

Rizvi appeared in front of the court during Rahman’s Monday arraignment to certify her willingness to guarantee Rahman’s bail, according to a transcript of the proceedings obtained by the Washington Free Beacon. “Urooj Rahman is my best friend and I am an associate at the law firm Ropes & Gray in Washington, D.C.,” Rizvi told the court. “I earn $255,000 a year.”

Rizvi entered the legal field after a career in the Obama administration’s intelligence community, where “her high-value work would often inform the President’s Daily Briefs,” according to her bio at the Islamic Scholarship Fund. The group gave Rizvi a law school scholarship sponsored by the Council on American-Islamic Relations, a radical anti-Israel organization that has been tied to the funding of global terror networks.

During Rizvi’s time at the New York University School of Law, she was a fellow at Ramallah-based legal organization Al-Haq, which was founded to challenge the “legal status of Israel as an occupying power.” The group is best known for filing lawsuits aimed at delegitimizing Israel and providing legal backing for the Boycott, Divestment, and Sanctions movement against the Jewish state.

The group has been criticized for its defense of the “right to resist” by Palestinian terrorist organizations and its defense and promotion of violent actions taken against Israel.

Rizvi was also provided a scholarship toward her law degree by the Paul and Daisy Soros Fellowships for New Americans, which was started by the now-deceased older brother of liberal billionaire George Soros.

This is the same Salmah Rizvi who once wrote she was a “moderate Muslim” who opposes terrorism.

In the neverending “ground zero mosque” debate, many people have been asking one question: Where are the moderate Muslims who denounce terrorism?

To that I answer: They are everywhere. I am one.

Muslim Americans not only are denouncing terrorism — as denouncement often can be the simple manifestation of political rhetoric and empty words — but also are fighting terrorism.
The fight against terrorism is deeply personal for Muslim Americans who seek to quell extremist operations that unfairly kill innocent human beings and disproportionally promulgate a distorted picture of Islam.

Yeah, I would suggest she is not exactly coming across as particularly moderate or anti-terror.