Remember how in June 2017 the Chicago Dyke March expelled some Jewish participants with Jewish Pride flags, because the flags “made people feel unsafe” and that the Dyke March was a “anti-Zionist, pro-Palestinian” space?

One of those defending this antisemitic conduct was none other than BLM co-founder Alicia Garza.

She received some pushback for this, but doubled down.

We also know that BLM has a real antisemitism problem.

I am telling you all of this because I read today that “Bobblehead Rav” Shmuley Boteach plans to honor her. 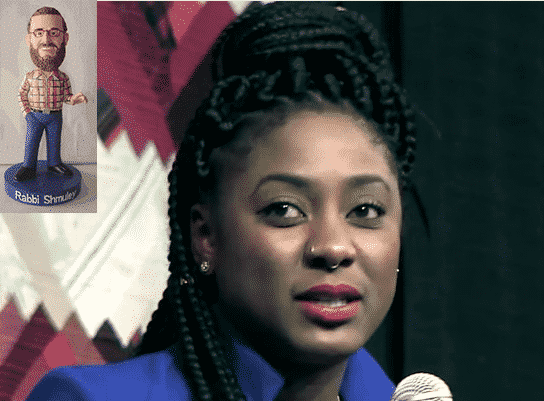 Rabbi Shmuley Boteach, executive director of World Values Network (WVN), announced on February 1 that his organization will celebrate the solidarity of Black and Jewish Americans at the Ninth Annual Champion of Jewish Values International Awards Gala.

It is one thing to honor someone who actually builds bridges with the Jewish community or at least has expressed an interest in doing so; but to honor someone who has done the exact opposite is embarrassing, and seems like a vanity project and an exercise in tuchus-kissing.

In contrast, the recently launched Black-Jewish Entertainment Alliance could actually achieve something, since those who signed on actually care about Black-Jewish relations. All this seems to be likely to achieve is to give Boteach more publicity.