Antisemite Linda Sarsour is quite adept at criticizing Jews without using the word “Jews.”

True, in moments of weakness, she has blurted out “the Jewish establishment,” but when she is trying harder, we are just “that people.” 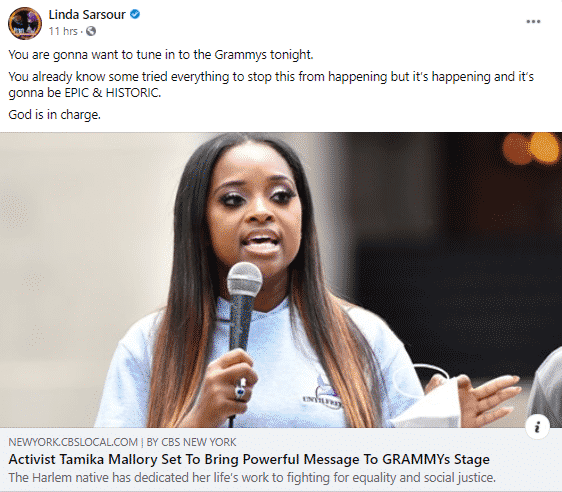 “Some” are of course Jewish groups, who opposed Mallory’s appearance because she has proven herself to be quite the antisemite.

By the way, this is what Mallory had to say at the Grammys.

“It’s a state of emergency. It’s been a hell of a year. Hell for over 400 years. My people, it’s time we stand. It’s time we demand the freedom that this land promises. President Biden, we demand justice, equity, policy and everything else that freedom encompasses, and to accomplish this, we don’t need allies. We need accomplices. It’s bigger than black and white. This is not a trend, this is our plight. Until freedom.”

I’m all for freedom, justice and equality. But us Jews also deserve those things, so quit trashing us or siding with those who do.