The Palestinian Information Center (and others) have alleged the IDF shot an elderly palestinian Arab woman in cold blood. 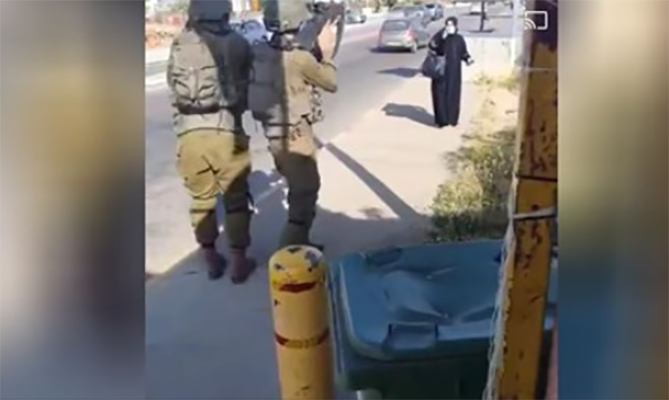 A Palestinian elderly woman was proclaimed dead on Sunday evening after she succumbed to a serious bullet injury she sustained earlier during the day when soldiers cold-bloodedly opened fire at her in southern Bethlehem.

According to the Hebrew media, 60-year-old Rihab Zaoul, from the West Bank town of Nahalin in Bethlehem, pronounced dead after transferring her to Shaare Zedek Hospital in Jerusalem.

Earlier in the morning, Israeli soldiers opened fire at the woman on a road near the junction of the Gush Etzion settlement bloc in southern Bethlehem on allegations of her attempt to carry out a stabbing attack.

The Hebrew media claimed the woman was wielding a knife when the soldiers shot her down.

Note how the Palestinian Information Center paints the idea that she was wielding a knife as mere allegations from the Hebrew media. There is literally video of the incident confirming this is what happened.

(incidentally, this tweet still describes this as a cold-blooded execution, even though it shows the footage contradicting this!)

Even the family does not deny her actions. They are claiming she did it because was mentally ill and wanted to die.

Al-Hroub’s family attest that her mental health had deteriorated sharply in recent months. The 60-year-old mother of one had previously attempted to die by suicide.

“She’d had a total nervous collapse and was totally out of control of what she was saying and doing. We took her to doctors for treatment, but she attempted suicide by overdosing on pills,” said Ibrahim.

At a loss for how to deal with her deteriorating mental state, her family brought al-Hroub to a mental health specialist in Bethlehem in mid-April.

“We took her to a psychologist, who diagnosed her with a condition — depression and severe anxiety,” her brother said.

According to a psychiatric report written by the Bethlehem-area specialist, al-Hroub refused to take her medicine. Her brother took her to see the doctor again on May 1, the day before she was shot in the alleged stabbing attack.

“She still refuses… therapy and medication and hope[s] for death and suicide,” the psychiatrist wrote in an English-language affidavit seen by The Times of Israel.

According to her brother, al-Hroub’s depressive episodes began quite recently when she was forced to close her previously successful hair salon.

“With the coronavirus and everything, she was eventually forced to shut it down. From three months ago to today, things deteriorated,” Ibrahim said.

After her business closed, al-Hroub began to experience panic attacks and began a downward spiral of blame, according to her brother.

“Everything was fine — our financial situation, everything. We didn’t want for food, nothing. But she started blaming herself, saying there was no money,” Ibrahim said.

Whether or not this was desired “death-by-cop” or a real attempted terror attack, what is clear is the woman was approaching soldiers with a knife.