Back in December 2020, the PA arrested palestinian DJ/producer Sama’ Abdulhadi after she coordinated and played a livestream event at Maqam Nabi Musa, a location commemorated as the tomb of the prophet Moses and currently used as both a place of worship and a tourist attraction featuring a hotel and dining. Following her arrest, even Roger Waters posted an article critical of the PA while encouraging people to sign a petition for her release.

Abdulhadi was eventually released, and she has spoken with Billboard to tell the world just how bad and corrupt the PA is.

Just kidding. She almost apologizes on behalf of the PA while taking the opportunity to use the incident to spread lies about Israel. 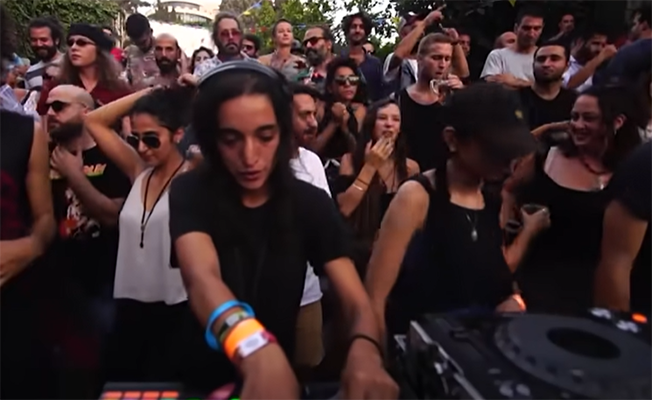 You mentioned how difficult it is to get a permit to even do a legal electronic event in Palestine. Then you actually got a permit for the event in December and things went sideways. What did it mean to you, it going down the way it did?

It kind of made sense for a very weird reason. When I got home I found the event on the news, I knew that tomorrow someone from the police will come talk to me, because the vice president said it on TV, that they were going to investigate. It was sad, because it was the first time I felt so safe and confident about doing something. Because I had a permit and because we had a filming five days before that one in Ramallah, and the police did come to close it, but when they saw the permit and that everything is in order and we were wearing covid masks and everything, they let us go and left. That was one of the reasons they believed me in the investigation, because the same permit was used five days ago.

So then what happened?

It could have been solved in two different ways. They told me, “The place is not a religious site, it’s a historical touristic site.” It’s a hotel that has a mosque next to it. They just got money, like four million Euros, to renovate it and do activities there, and they’ve been doing that for that past year. The company that was supposed to take it over put a hold on it because of Covid. They didn’t want to run a hotel during the pandemic. That’s a losing business, so they put a pause on the project.

So when the crowd of people showed up, they said it’s a religious site. That’s why they want something to happen, instead of the prime minister going on TV and making it clear that it’s a non-religious historical touristic site and that [they] just put $4 million in it to make it into a hotel. Then people would have been like, “Okay, it’s a hotel.”

But they didn’t do that?

But they didn’t do that. They feared the public opinion, especially when it comes to religion, because as you know Palestine is full of holy sites, and Israel keeps desecrating them, every week they have to throw bombs or crash a prayer at the Aqsa mosque [in Jerusalem] and ban Muslims from going in to pray in the holiest site for them. I remember very well in the intifada, when they surrounded and besieged the nativity church for over a month with Palestinian resistance stuck inside and 200 or so monks. So I know and understand how sensitive that topic is, because it bothers me too.

In fact, she reveals that a motivation for holding the event to begin with was to somehow entrap Israel into reacting and catch that on camera.

When you did get out, what was it like to then be at the center of this global story?

I never wanted to make that story. I’ve always been trying to spread awareness of Israel and everything Israel does. The location where I was filming is next to the biggest illegal military camp for Israel, and I honestly thought who was going to hear about it and come make a problem was Israel. I thought that the military was going to come and throw a couple of gas and sound bombs and we’d have that on tape and put it out. That was the worst case scenario that crossed my mind. I didn’t expect it to have a bad effect for Palestinians.

In her defense, she seems rather delusional.

Where does your case currently stand? Are you allowed to leave Palestine?

Will there be a trial?

No idea. I hope they just close the case.

That’s the best case scenario for you?

Yes, I have hope in justice and the belief in my heart that my government is not corrupt to pin this on me.

I have a feeling Roger Waters may be sharing this interview.