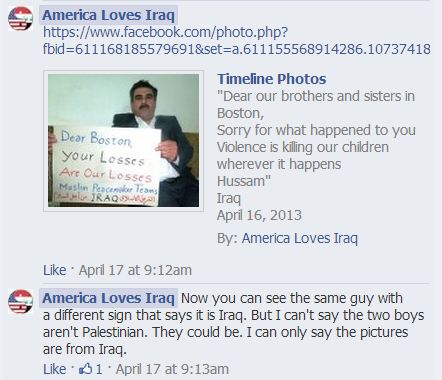 David Lange - May 5, 2020
0
A palestinian propaganda Twitter account called Palestine Post 24 has tweeted out this heart-wrenching photo, claiming "this is the daily life of Gaza children."

David Lange - January 21, 2020
0
The haters continue to take photos from massacres around the world and maliciously try to pass them off as from Deir Yassin

Blood Libel: The Case Of The Torturing “Settlers”

Fauxtography Of The Day

David Lange - May 10, 2020
3
A self-described "Palestinian, Journalist" who tweets "about my life in besieged Gaza" has tweeted out this plea to help "the children of Gaza"

Mirabelle - March 28, 2016
1
When I saw this, I jumped into action with a reverse image search

David Lange - April 23, 2020
0
Yesterday, I exposed a palestinian propaganda campaign in which an ad agency was employed and fake images of Gaza created. It turns out those behind it were Federación Palestina de Chile (the Federation of Palestinians in Chile)

Fauxtography Of The Day: Cruelty To Palestinian Women Edition

“I Did Not Say the Photo Was From Gaza”

David Lange - February 12, 2020
0
Following my post yesterday on the latest example of palestinian fauxtography, which I showed to be from Greece and not Gaza, the guy who disseminated it provided us with this excuse when sprung
123Page 1 of 3