David Lange - August 25, 2012
8
In case it wasn't already obvious to you that this antisemite supported terrorists, here she is showing her displeasure at Hizbullah's banning from Facebook

Lauren Booth Spouting More Hate Against Israel And The US

David Lange - August 18, 2012
9
These guys did a great job getting Booth to tell them how she really feels. And it ain't pretty.

David Lange - March 27, 2012
7
Anti-semite Lauren Booth seems to have serious issues with telling the truth - she hates it almost as much as she hates Jews and Israel

The Dignity Of Lauren Booth

David Lange - February 2, 2012
10
Antisemite Lauren Booth once again yabbers on about her conversion to Islam

David Lange - November 14, 2011
8
Antisemite and apparent occasional Israellycool reader, Lauren Booth, may be in a whole heap of trouble

Lauren Booth Visits Israellycool, And Confirms She Is A Big Fat Anti-Semite

David Lange - October 5, 2011
44
Anti-semite Lauren Booth has paid us a visit to respond to my post about her mother being Jewish. And what a f****** ray of sunshine she has proven to be

David Lange - October 2, 2011
13
Has one of Lauren Booth's claims been (inadvertently) debunked by one of her allies?

David Lange - August 15, 2011
9
Israel hater Lauren Booth is the porker who can't stop telling porkers, especially when it comes to the circumstances of her conversion to Islam. Here, she offers yet another version.

David Lange - June 1, 2011
3
Anti-Israel "activist" and antisemite Lauren Booth seemed to praise members of Hizbullah during a speech in April. 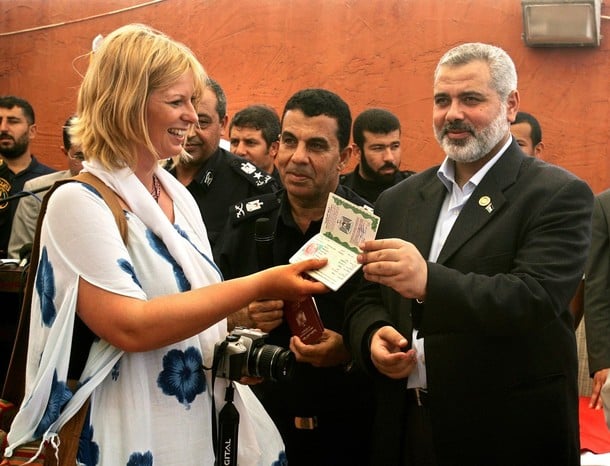 David Lange - April 18, 2011
14
Lauren Booth, the vapid Israel hater and recent convert to Islam, has explicitly accused Israel of being behind the killing of ISM tool Vittorio Arrigoni. Not to mention the killing of Jewish-Arab actor Juliano Mer Khamis.