Joke Of The Day

David Lange - August 18, 2010
22
Following yesterday's mortar fire that injured two soldiers, the IDF did what it normally does in such situations. Strike smuggling tunnels and/or terrorist infrastructure.

David Lange - August 12, 2010
9
A court investigating the assassination of former Lebanese Prime Minister Rafik Hariri has asked Hizbullah leader Hassan Nasrallah to cough up the supposed evidence he claims to have that Israel was behind the assassination.

David Lange - August 11, 2010
14
UN Secretary-General Ban Ki "Banky" moon convened a panel investigating the IDF's flotilla raid for the first time, with his spokesperson not ruling out the questioning of IDF soldiers, something to which Israel is firmly opposed.

David Lange - October 5, 2008
1
You are probably all familiar with the health warnings on cigarette packets. You know, warnings like Smoking causes lung cancer...Smoking clogs your arteries...Smoking May...

If I Were a Foreign Press Photographer

David Lange - October 3, 2008
0
A Palestinian boy sticks his face through a wooden cutout of a cowboy to have his picture taken at an amusement park on the... 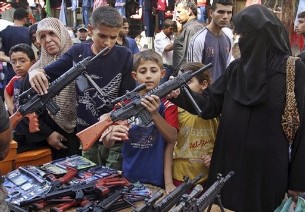 Scenes from a Concentration Camp

David Lange - October 2, 2008
3
In the Gaza concentration camp, palestinian children scavenge for scraps of food... ..while palestinians of all ages engage in good, clean fun.. Meanwhile, the palestinians of...

David Lange - September 23, 2008
15
I have just woken up to the news that there was another terror attack in Jerusalem last night. Once again, the terrorist was an Arab...

David Lange - September 22, 2008
0
An IDF soldier has lost sight in his eye after a palestinian woman threw acid in his face, exploiting more lenient security measures at...
123Page 2 of 3