A number of civilians reported suffering from gas inhalation and for the first time Israeli troops threw smelly manure at the protestors. 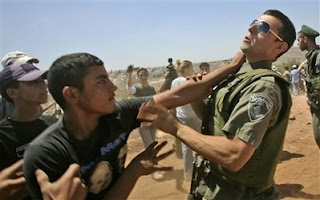 I couldn’t find any wire service photos from today’s Bil’in protest, but yesterday’s Naalin protest which the IMEMC also described as “non-violent” was captured by this AP photographer, showing a non-violent protester punching an aggressively violent IDF soldier in the face. (Also a picture of some non-violent rock hurling with slingshots.)

Ah, but that’s not the half of it. The Arabic media is reporting that the nefarious IDF did much, much worse things in Bil’in, calling this “field testing” new weapons (autotranslated):

The march started from the village centre and headed towards the wall, where participants tried to cross into their confiscated land , but the occupying soldiers fought them with fire hoses (using) contaminated wastewater cow dung and chicken (dung) with some chemicals, thus leading to the injury of dozens of cases Altakiu , Where demonstrators surprised color green and fragrant water stinking, and that became his clothes for several hours.

Just imagine the infrastructure necessary to weaponize cow dung and wastewater. You gave to fill out the necessary paperwork, requisitioning the manure for the purposes of stopping non violent protests; you have to establish a relationship with the manure bendor, you have to test the manure to make sure that it has the correct consistency for flinging at the optimum distances (you don’t want blowback!) which means having farms dedicated to creating consistent diets for cows and chickens in order to ensure quality dung; you need a good mechanism for dung delivery which means that weapons need to be created for each type and size of manure bullets or cannons (as the case might be), you have to have a way of loading the weapons without getting dirty or smelly, meaning special gloves and clothing….and that’s just the dung. For the wastewater you need to transport it in special trucks just for the purpose of putting down protesters….

Wow, my respect for the IDF’s logistics personnel just went up a hundredfold!