In March, the Palestinian Center for Human Rights widely released a report detailing the people who were killed in Gaza during Operation Cast Lead. This report was a seemingly comprehensive list of the details about every death: the name, gender, age, location, and job of each person is detailed. Most importantly, the PCHR classified all the victims as being either “militants” or “civilians,” and their counts indicated that 1181 of 1417 victims were civilians.

Meanwhile, the IDF has claimed that there were 1166 killed in Gaza, of whom 709 were known Hamas or Islamic Jihad militants.

The IDF did not release their list of casualties, so its claims cannot be independently verified at this time. On the other hand, I and two other bloggers have been researching the PCHR’s claims and have found serious inconsistencies with that organization’s methodologies and classifications.

Our team cross-checked the names listed by PCHR with lists of “resisters” compiled by the Al Mezan Center for Human Rights as well as lists of “martyrs” published by Hamas, the Popular Resistance Committees and other militant groups in Gaza, as well as from the Ma’an News Agency, Palestinian Arabic discussion groups and other sources.

Our preliminary results show that at least 166 of the people killed, that PCHR classifies as “civilians,” were, in fact, militants.

PCHR’s criteria to determine exactly who is a “militant” is unclear. They seem to claim that they are only counting those whom they had direct evidence were engaging in hostilities at the moment of their deaths, but this is far from clear. At any rate, the term “militant” is not a legal term, and in common usage it refers to anyone who belongs to a military or paramilitary group. The PCHR’s statistics are deceptive and slanted towards creating a false impression of IDF brutality.

So far, we have identified members of Hamas, Islamic Jihad, the Popular Resistance Committees, the PFLP and the DFLP who are all considered “civilians” by the PCHR. The full list can be seen at http://elderofziyon.blogspot.com/2009/04/more-of-those-civilians-killed-in-gaza.html. These include the links to the original sources where the victims are associated with these various militant groups. 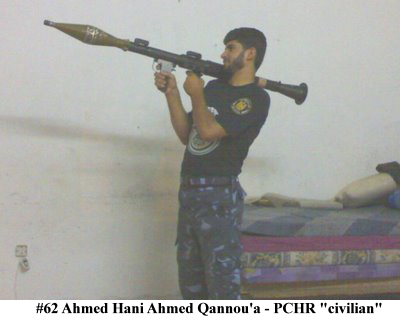 This is far from a comprehensive list. This is only based on the names that we have found. We are not trying to create a full count of civilians and militants; rather we are showing that the statistics given by the PCHR and publicized in the media are knowingly false.

The IDF has categorized most or all of the Hamas police force as “Hamas or Islamic Jihad operatives” and therefore as legal targets. The PCHR takes strong exception to this categorization, and reveals its own definition of “combatants”:

PCHR consider the IOF’s classification of police officers as combatants illegal: this classification constitutes a wilful violation of the principle of distinction, a key component of customary international law. Hamas is a multi-faceted organisation, exercising de facto governmental control of the Gaza Strip. As an organisation, it cannot be considered an armed group. Rather, a distinction must be made between Hamas’ armed and political/civil components. The Izz ad-Din al-Qassam Brigades are the military wing of the Hamas organisation, they are an armed group, and are considered as combatants according to IHL. However, Hamas’ political and civil wings are comprised of civilians, who are legally entitled to the protections associated with this status, provided they do not take an active part in hostilities. Civil police, and governmental officials cannot be considered combatants. Attacks intentionally directed against these individuals constitute wilful killing, a grave breach of the Geneva Conventions, and a violation of customary international law.

If we fully accept the PCHR’s definitions and interpretations of international humanitarian law (IHL) here, then they are saying that members of armed militias like the Al Qassam Brigades are legal combatants and therefore legitimate targets. By extension, it is clear that the Hamas policemen who were also members of the Al Qassam Brigades were, in fact, legitimate targets from the IDF.

Certainly, the PCHR is aware of the affiliations of many of not all of the victims in Gaza. To give one example, the Popular Resistance Committees al-Nasser Salah Addin Brigades published a list of its 18 “martyrs” on January 22, 2009. Yet nine of them – including a “commander” and a “field commander” – were classified as “civilian” by the PCHR nearly two months later. It strains credulity to think that with all the effort the PCHR made in compiling the names and classifying the victims that they were unaware of their affiliations with armed groups.

Why, then, did they classify so many known militants as civilians? One can only conclude that the PCHR is not being consistent with even its own description of who is considered a “militant” – and that the reason is to deceive the readers of its reports and the media who would uncritically report the PCHR’s conclusions.

We have identified at least 73 militants among the Hamas police force in Gaza. Most of them were affiliated with Hamas Al Qassam Brigades, and our count is not complete. Such a high number of Al Qassam members among the police that were killed indicates that Hamas itself does not distinguish between its so-called civilian and military wings. Effectively, Hamas considers its police force to be the same as its military force. If Hamas does not respect the principle of distinction in its own civilian organization, it forfeits the demand for its opponents to adhere to the principle of distinction, and the entire police force would be considered a legitimate target.

The evidence that Hamas doesn’t distinguish between its civilian and military wings is overwhelming; for more on that topic see this excerpt from Hamas: Politics, Charity, and Terrorism in the Service of Jihad by Matthew Levitt:

Because of the notion that Hamas has independent “wings,” its political and charitable fronts are allowed to operate openly in many Western and Middle Eastern capitals. In these cities, Islamic social welfare groups tied to Hamas are often tolerated when their logistical and financial support for Hamas is conducted under the rubric ofcharitable or humanitarian assistance.While convenient for Hamas and its supporters, this distinction is contradicted by the consistent if scattered findings of investigators, journalists, and analysts. A review ofthe evidence regarding the integration of Hamas’ political activism, social services, and terrorism demonstrates the centrality of the group’s overt activities to the organization’s ability to recruit, indoctrinate, train, fund, and dispatch suicide bombers to attack civilian targets.

The social welfare organizations of Hamas answer to the same political leaders who play hands-on roles in Hamas terrorist attacks. In some cases, the mere existence of these institutions is invoked to classify Hamas as a social welfare rather than a terrorist organization. To debunk these specious assumptions, it is necessary to fully expose what Hamas calls the dawa (its social welfare and proselytization network). This is sometimes difficult because, as one U.S. official explained, “Hamas is loosely structured, with some elements working clandestinely and others working openly through mosques and social service institutions to recruit members, raise money, organize activities, and distribute propaganda.”

Yet even without this knowledge, the PCHR is inconsistent in its definitions. Its only consistency, as evidenced by its use of the term “IOF” (“Israel Occupation Forces”) instead of IDF, is a desire to make Israel look as bad as possible. This is not the function of a “human rights” organization – it betrays a political agenda rather than a humanitarian one.

An interesting finding from the PCHR report regards the al-Fakhoura UNRWA school in Jabalya. On January 6th, 2009, the IDF returned fire from nearby the school, and the initial reports from various Gaza organizations charged that between 30 and 50 people were killed there. The PCHR wrote then that the IDF killed “27 civilians instantly” (not counting the Deeb family which was not near the school and indeed appears to have been killed by an errant shell.) The IDF, on the other hand, has claimed that 12 were killed outside the school.

The PCHR report lists exactly 12 victims from near the al-Fakhoura school, although they do not line up with the names and descriptions given by the IDF. Even so, the PCHR does not seem to be interested in publicizing the discrepancy between its initial reports of a massacre and what it later admits.

The PCHR press releases emphasize child victims of the conflict, but they do not mention another fact of which they are aware: that children are being drafted for use by militant groups.

The PCHR list includes 7 militants who were under 18. We have identified another 3 children who were members of militant groups. We have yet to see the PCHR condemn Hamas for its recruitment and use of children as fighters.

While the results are not complete, there is overwhelming evidence that the PCHR knowingly and maliciously lied in its statistics regarding the numbers of civilians and militants killed during Operation Cast Lead. Given its clear biases, the most reasonable conclusion is that the PCHR was not nearly as interested in the truth as it was in demonizing the IDF. The report itself cannot be considered reliable.

Given this information, it is difficult to know whether to believe that organization in other areas.