I just looked a little at the Human Rights Watch report on Israeli drones killing civilians in Gaza.

The report was mainly written by Marc Garlasco, who had famously blamed Israel for the very ambiguous Gaza beach blast in 2006 and whose credentials as an expert are equally ambiguous.

I didn’t have time to look at the report too carefully, but it follows the normal HRW playbook of doing everything possible to blame Israel for not being perfect.

The main example was the famous case of Israel bombing what appeared to be a group of men loading a truck with missiles.

To support its statement, the IDF released video footage of the attack, made available online, probably taken by the drone that launched the missile. It showed a group of at least one dozen men casually loading cylindrical objects crossways onto an open truck immediately before the missile struck. At least five more men are seen standing around the vehicle.The IDF video does not show any secondary explosions, which would have indicated the presence of weapons-grade explosives or propellants at the site. Nor was the destruction at the site consistent with the presence of rockets. Had the truck been carrying Grad rockets with warheads, the truck and adjacent buildings would have been destroyed. Even without warheads, the propellant in the rockets would have destroyed the truck.

Credible doubts about the attack arose on December 31, when the Israeli human rights group B’Tselem released an interview with the owner of the truck, Ahmad Samur, who said that he was transporting oxygen canisters used for welding, and not Grad rockets. According to Samur, his family was trying to move the canisters from the metal workshop he owns to protect them from looters. He denied any connection to Hamas or any other Palestinian armed group. Eight civilians died in the attack, Samur said, including three children and Samur’s son ‘Imad, age 32. Two others were severely wounded.

As HRW mentions, the video is widely available.

However, the objects were being taken from the vicinity of a metal workshop – the places that Qassam rockets are typically built. It is a very reasonable assumption that these were weapons of some sort. HRW doesn’t even consider that the IDF might have a case in targeting these men. Would an average soldier looking at this video be able to make such an assumption that these are oxygen tanks, knowing that at that very moment there were dozens of rockets being fired at Israeli communities daily? I cannot blame the IDF for their decision – but HRW, of course, does.

One other interesting fact. HRW lists the names of those killed during the attack, and says that eight civilians were killed and none had any connection with any terror group. However, one of them, Ashraf Sayed Khamis al-Dabbagh, was identified as a “militant” by the PCHR. (#366.)

One other person I noticed from the report, Adham Hamdi al-‘Adani, killed when the IDF hit near a Gaza school, is this person depicted in an Al Qassam Brigades martyr poster, #33 in the PCHR list: 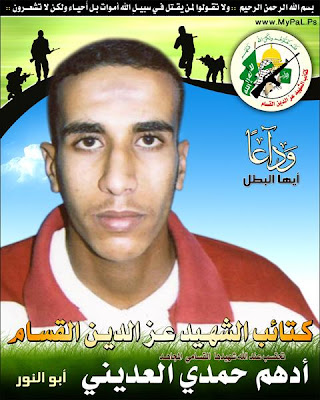 He is identified here as a member of the Al Qassam Brigades Deir al-Balah Battalion.

This is not to say that these bombings weren’t mistakes. Most of the victims do not appear to have been terrorists, and the IDF should – and does – do everything necessary to avoid killing civilians. There are articles and video that show the IDF aborting bombings when they see civilians in the area, evidence that the HRW seems to ignore in its reckless quest to damn Israel as being indiscriminately violent.

However, HRW either ignored evidence that some of the “civilian” victims they are talking about were actually terrorists or it didn’t do any reasonable research (typing the names into Google should have been enough.) This is either sloppy work or it is purposeful deception on HRW’s part.