The second siege breaking voyage organized by the Free Gaza movement has been delayed for “logistical reasons.” The ships were scheduled to dock in the Gaza port on Monday, and have not set a new date of arrival.

Chairman of the People’s committee against the blockade and member of the Palestinian Legislative Council (PLC) Jamal Al-Khudari, said that the doctors, journalists, parliamentarians and activists set as the ship’s crew have begun to arrive in Cyprus.

Do you think this is perhaps because our leftist terrorist-supporters are having a hard time raising money from the masses of people who pretend to want to help ordinary Palestinian Arabs? 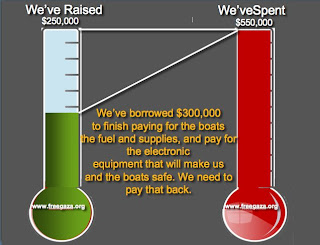 We’re broke and we need money NOW! We are at a critical stage of our project and your help is needed. All of the money raised so far has been spent on the boats and project logistics, and we have taken an emergency loan for $70,000. That is why our illustrations below show more money spent than raised. We have already spent more than a half million dollars, at least half of which is in loans. We currently have less than $20K in our accounts. And we have to pay around $70K in fuel alone before this is over. It looks like we also might need a substantial amount ($15K though not certain) to make the satellite link work, and we really should bail out some of our Greek friends who have put themselves at serious financial risk to lend massive amount of funds to us. In all, we need $50K right away and $100K soon after, and then an additional $200K to pay back the remainder of the loans.

If they couldn’t get enough money to pay for even half of their first PR stunt, who is going to pay for the second one – which will inevitably have much less publicity?

The reason they can’t raise money is clear. Their mission is not to help Palestinian Arabs but rather to embarrass Israeli Jews. People are naturally charitable but even leftists know that this money is only being used for hate, not to help anyone in any real sense. So only the die-hard anti-semites and anti-Zionists are willing to put any cash into this money pit.

Which goes to prove once again that Israel does more to help ordinary Palestinian Arabs than any number of political groups who pretend to care so much about them.

Even their money to buy their fashionable keffiyehs is not going to their cause!

Aussie Dave adds: I had a post lined up, but Elder beat me to it this time. My observations: