MPs are threatening to take action unless Israel’s name is removed from Gulf Air’s website among a list of countries under its frequent flyers services.

The parliamentary Palestinian Support Committee plans to send a letter to the airline on Sunday demanding answers.

Under the scheme, passengers from any nationality can apply for frequent flyers membership stating their country of origin.

Committee chairman Nasser Al Fadhala said that the airline had been alerted previously on the issue, but they never responded.

“We don’t normalise ties in any possible way with Israel and the inclusion of Israel as one of the countries, in which its citizens are allowed to benefit from the scheme, implies the opposite,” he said.

“Bahrain is a country that refuses to accept any normalisation with Israel, especially with the Palestinians being evicted from their homes, tortured and killed.”

“Gulf Air and officials behind it will pay the price heavily if they insist on not having Israel’s name removed,” he said.

“We plan to start using our monitoring tools, which will certainly enable us to reach the bottom of this issue.

“The minister is not responding, but maybe if we take a tougher approach, he will take action, or else we will force him to do so.”

A Gulf Air spokesman said the reference to Israel on the website was merely in a dropdown menu so passengers registering for the frequent flyers offer could enter where they live.

“In fact, we have a number Israel-based Arabs in our programme already and it would be a pity to deny future passengers the opportunity to join our programme,” he said.

In the end, the people who they are hurting are the Arabs who have the audacity of living in Israel. You know…. the very “Palestinians” whom they claim they are doing this for.

Here is the outrageous webpage that is causing members of Bahrain’s parliament to spend hours of their time seething, with a visual aid so you can find the problem yourself. Israel is listed in the drop-down menu along with some 200 other countries: 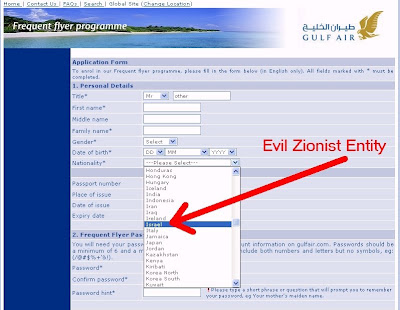 Just in case anyone is still wondering how much the Arab world really cares about “Palestinian” rights, as opposed to destroying Israel, here’s a little clue:

“Palestine” is not mentioned in Gulf Air’s list of countries for “nationality.” But the MPs are not complaining about the absence of “Palestine” on the website, but the existence of “Israel.“