“All art is propaganda. It is universally and inescapably propaganda; sometimes unconsciously, but often deliberately, propaganda.” ― Upton Sinclair

Sinclair is right. Today, everything is propaganda. The situation is so bad that everything we value gets distorted. And while I attest that art is often used for social mobilization, raising awareness of a social issue, or fighting political oppression, the real definition of art is this:

“The making or doing of something whose purpose is to bring pleasure to people through their enjoyment of what is beautiful and interesting, or things often made for this purpose, such as paintings, drawings, or sculptures.”

This is what I believed in as a ballet dancer and an Arts graduate. As a kid when I was sad, I listened to Chopin or Satie; when I was happy, I went to see the latest avant-garde exhibits. Both served one purpose: elevate and uplift.

Obviously, things change, and in the world where free speech prevails over prohibiting hate speech; where nudity prevails over real creativity; or where gratification roots in propaganda, what do I even expect when I enter the latest big show in New York City?!

There is so much to say about my experiences in New York – as a conservative, legal immigrant; a non-Jew surrounded by liberal Jews. But let’s stick to art.

I moved to New York just around the elections. Up until that point, I was mesmerized by the freedom the city offered me. As an artsy soul, I was in heaven. There is art everywhere.

After the elections, however, I faced New York’s different face – a face that was invisible for me because of naivete, because of culture shock, or maybe because I was just too blind happy that after four years of freaking hard work, I had my papers to legally say: I am living in the USA.

So this second type of New York is a place that is the best demonstration of the illiberal political mainstream. You are free as long as you belong to the ones marching against Trump week after week. You can enjoy art as long as you enjoy seeing pro-Muslim and you are okay to put up with anti-Trump, and anti-Israelism (anti-Netanyahu-ism) wherever you go. This New York is less welcoming, and my artsy endeavors are lingering between occasional heavens and more frequent hells.

Here is the latest example of the latter. 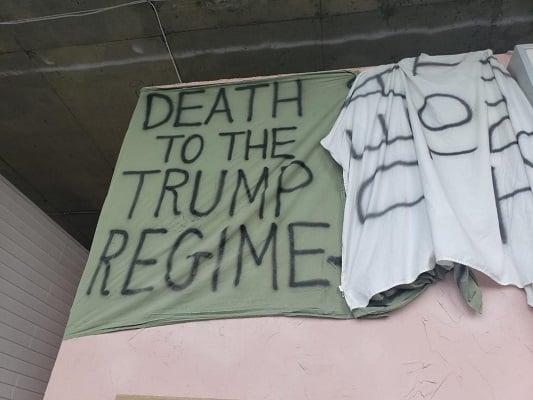 Street art is big, and since my first trip here and to Israel (yeah, shout out to Florentine), I have been studying the evolution of graffiti and street art. I believe I became a better and more tolerant person by understanding the gang-ism and the major turning points.

There is an exhibition that will be huge in New York. You know it will be huge because you know the city already. Plus, it is Instagramable, so even if people do not care for art, they care for their Instagram likes. Granted: the exhibition, Beyond The Streets, will be a success.

Here is my piece of advice: if you go for the real deal, stop after the first floor.

The second floor is warning you: social activism. And that is cool – at large, at least. But where it all goes wrong is when the damn PC is making you choke. When art becomes the tool of the left. When you look at art and you feel you are listening to CNN. This is not art, but propaganda. It is not art when I need to feel uncomfortable with my personal values at a gallery. Or when I feel that everyone around me would call me a racist, fascist or a hater just because I would say: no, I do not think sending illegal people home is a crime; no, I do not think Netanyahu is a Nazi (regardless of what I think of him); And no, I do not think Trump and his regime (sic) should be murdered (regardless of my political affiliations). 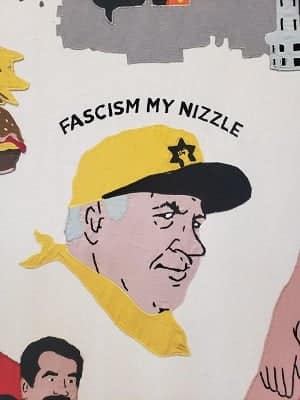 Artists got far too lazy. Today anything is art. So let me remind everyone again for the definition outlined above: art is about creativity; it is about a skill materialized in the form of outlet. Demagogy is not a form of art.

But here is where the tolerance of my conservative values are switched off.. 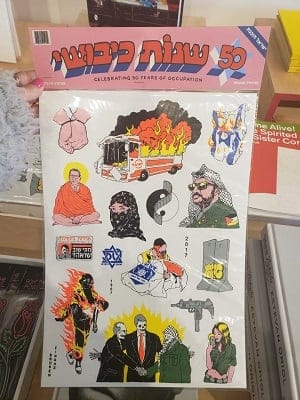 How is this relevant to the exhibition at all?

Why is Israel always on the table even if you are just selling soda?

Why and how do we allow galleries, museums, theaters and likes to take political sides?

So my only remaining question to all these artists and their crowd: when you say “Make Art not War”, do you think you uphold your fancy slogan?

And as for beyondthestreets.com – you think you are exhibiting against the bad and the ugly –  but, in reality, by selling those stickers, you have legitimized terrorism. Well done!