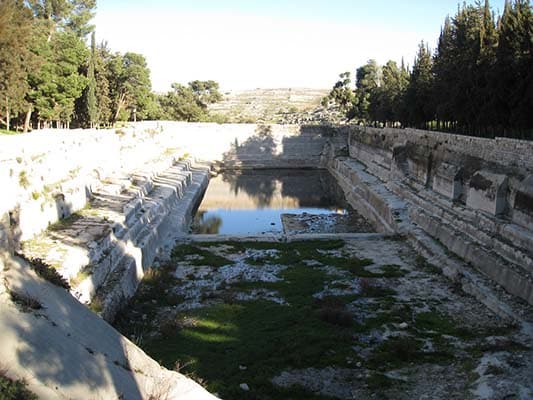 Israeli settlers today raided the Solomon’s Pools archeological site, to the south of the occupied West Bank city of Bethlehem, under the protection of heavily armed Israeli forces.

Palestinian security sources told WAFA that Israeli forces sealed off the area as settlers stormed the pools where they performed Jewish rituals.

Jewish settlers have recently intensified their raids of Solomon’s Pools, a famous cultural site visited by many tourists around the world, in what Palestinians fear is a prelude to taking it over.

Visits by Israeli Jews to sites across the West Bank often cause tensions with local Palestinians, as these visits are accompanied by large armed escorts.

A tourist site in the palestinian controlled territories, visited by Jews. How dare they! And with large armed escorts, no less. Gee, I wonder why!

But it gets more ridiculous.

Located near the Palestinian village of Artas, Solomon’s Pools are three large cisterns — each more than 100 meters long — that were historically part of an ancient aqueduct system connected to Jerusalem.

Ottoman Sultan Suleiman the Magnificent repaired the cisterns in the 17th century and built a fortress beside them, which still stands today. Adjacent to the Pools lie the remains of an ancient Ottoman fort set in a beautiful grove of pine and cypress trees. The actual reservoirs were in use up until 1946.

Many Jews, however, believe that the pools are named for the Biblical Solomon.

I wonder where these “many Jews” would get the idea that Solomon’s Pools are named after King Solomon. Clearly they were named after Sultan Suleiman, even though the spelling is different and they obviously existed before he repaired them.

Alternatively, it is not just “many Jews” who believe the pools are named after King Solomon. Even Bethlehem tourist sites and others acknowledge the possible connection to him.

At least the vehemently anti-Israel WAFA has acknowledged the existence of the Jewish King Solomon from biblical times, well before their guy was even in diapers.