This is what he tweeted in response to a tweet from Iran’s supreme leader Ayatollah Khamenei, who hit back at US President Donald Trump after he threatened to make him pay a ‘big price’ for the US embassy attack in Iraq. 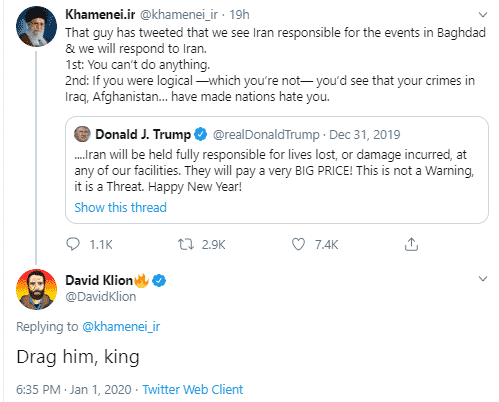 Perhaps because he has rightly been called out on this (including calls to charge him with treason), Klion has invoked the “just joking, and anyone who did not see it is an idiot” defense.

Alanis Morissette called and wants the misuse of the word “ironic” back.

One look at Klion’s Twitter feed and you get an idea just as to how unhinged he is regarding President Trump. I don’t believe for a second he was being “ironic” or tweeting in jest. I believe he really was siding with Iran’s supreme leader – who would love nothing more than the elimination of not only Donald Trump but the United States – and doing so when the US President was responding to a violent Iranian-led attack on a US embassy.

And yet we are supposed to believe the far Right, as detestable as they are, are the bigger threat.