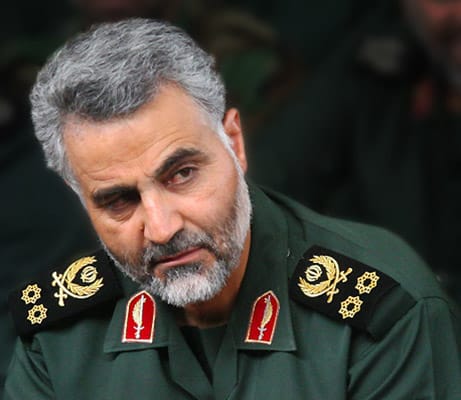 “Qassem Soleimani, an austere and revered religious scholar of Ayatollah Jihadism, has been brutally assassinated by President Trump while vacationing peacefully in Iraq. CNN reporter Rashida Proxy-Jihadus gives us an update live from Baghdad.”

Proxy-Jihadus: Soleimani was a modest and gentle spiritual person who cared deeply about squirrels in Lebanon, desert scorpions in Syria, Iraqi goats and Yemeni camels. It is pure hypocrisy by President Trump to vacation at Mar-a-Lago while simultaneously blowing up Soleimani’s peaceful vacation in Baghdad.

CNN: What was Soleimani doing in Iraq?

Proxy-Jihadus: Typical stuff that tourists do. Hanging out with local terrorist….tour guides enjoying the local sites inside Baghdad’s Green Zone next to Western embassies.

CNN: What were Soleimani’s militant pals doing next to the American embassy?

Proxy-Jihadus: Soleimani was the ultimate bridge builder across the Middle East. He united all the region’s Basket Case of Deplorables into a spiritual “Resistance Yoga Alliance”. During the intense Iraqi-Iranian embrace in the 1980s, Soleimani served as Iran’s Culture Attaché in Baghdad, sending brainwashed Jihadi kids across the delicate diplomatic mine fields.

CNN: What is the noise in the background?

Proxy-Jihadus: Angry people in Baghdad chanting against America and Israel.

CNN: Please turn on the loudspeaker.

In the background……”Dance with America! Dance with Israel!

“There is nothing new about American terrorist attacks against Black and Brown people for the expansion of American imperialism,” he tweeted.

“Show me some vanilla white, pink, yellow or green folks attacking US embassies and US soldiers and our multicultural colorblind Hellfires will happily greet them.”

Darth Viper AKA Soleimani: Shuk-Luke, help me to take off this Jihad mask.

Darth Viper: Nothing can stop that now. Just for once, let me look on the Hellfire virgins with my own eyes.

Shuk-Luke Desertwalker: Revealed yourself you have! Boy, you look even uglier without the mask. The funds from uncle Barack Hussein must have really dried up since the Supreme-Comedy emperor could not even afford to give you mouth spray.

Desertwalker: No, you are coming with me Godfather. I am not going to leave you here. I have to save you.

Darth Viper: You already have, Shuk-Luke. Sell my ring on Jihadbay and get some decent nuclear pita bread. Remember to change Assad’s Alawite diapers and feed my Lebanese malnourished Nasrallah hamster Jabba the Jihad-Hut. You were right about me. Tell your Caliphate Congress sister Ilhan Omar that you were right.