Syrian Girl aka Partisangirl aka Mimi al-Laham aka Syrian Sister (real name: Maram Susli) is a Syrian-Australian YouTuber and vile antisemite I have exposed on here before.

She is also a favorite of Israel-haters not troubled by her antisemitism (probably because they also dislike Jews).

Today, she tweeted a call to remove statues of Martin Luther King 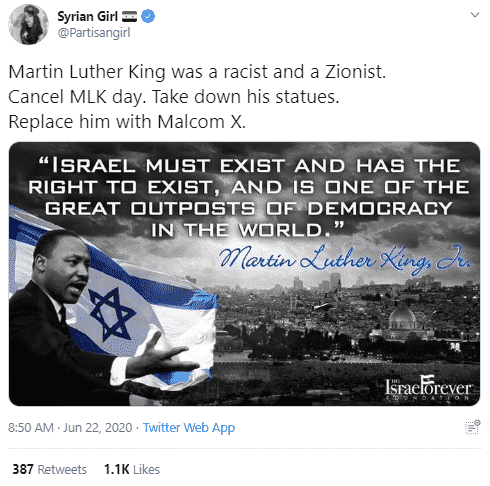 Remember, this is the same person who would never dare call for the toppling of statues of her hero, mass murderer Hafez al-Assad (though thankfully, that has already been done)

People who truly cared about Black lives would never make such a call to topple the statue of a venerated leader of the Black community.

That’s because she is not about Black lives mattering but rather Jewish lives not.