A member of the palestinian rap group DAM posted the following “selfie” on social media.

A selfie while the Israeli military running after me. pic.twitter.com/bdgO7xURd2

Notice the number of retweets. And on Facebook it has been shared over 160 times and ‘Liked’ over 3,600 times at the time of this post.

Here’s a sample of the ensuing reactions: 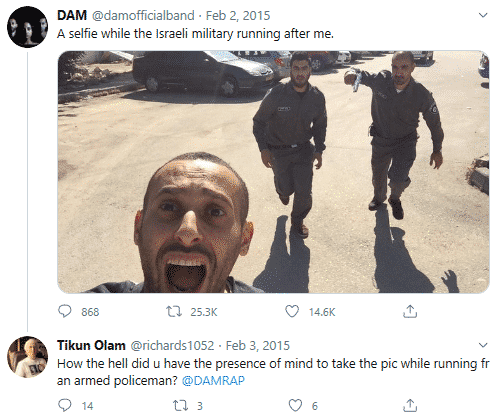 @DAMRAP Allah Khaleek and Allah Maek. This picture says it all! #FreePalestine

.@DAMRAP @DopeMsNoir that is the most baller thing I’ve ever seen

The first clue were the uniforms – including sneakers – which are most definitely not IDF issue. Plus the pose of the “soldier” on the right looked distinctly fake.

Then I checked further and saw I was not the first to notice. In fact, Buzzfeed already covered it.

An associate of the band has confirmed to BuzzFeed News that the photo was staged, but did not want to be quoted on record as they’ve enjoyed watching the reaction the photo is generating online.

The question is, how many people seeing the photo and sharing it will bother to check up on its authenticity? After all, most of those sharing it want to believe the lies it represents.

Update: According to Israeli site Walla, the “selfie” is taken from a new film about the rapper’s life (hat tip: Gidon).

The point still remains that he posted it as a true selfie and then sat back and watched the reactions.

And CUT….
A pic from a film set that's based on a true story!#Thelastverse pic.twitter.com/Te9Zy1xZYp