Today’s anti-Israel boycott is the runt-child of the state-level Arab boycott of the late 60’s and 70s. As this crumbled or became irrelevant, it was replaced by a rag tag bunch of street theatre artists who happened to have well-financed political and media backing. That’s something to always remember when this kind of low level, unimportant garbage goes on.

The BDS-Holes have been busy in New York. These BDS stickers have appeared on Israeli Sabra Hummus and other delicious and healthy products in CVS Pharmacies in New York City. People like Becky, below, reported this to CVS Pharmacies:

@CVS_Extra this was in your store in Manhattan, how do you allow this on your products? I'm extremely upset. pic.twitter.com/KKaQ9avu3q

And CVS replied wanting to know precisely where this is.

@BeckySebo could you please share the store number or address so that we can look into this further? Thank you!

David Melech Israel has found this Mohammad Hamad claiming to be the one placing these stickers: 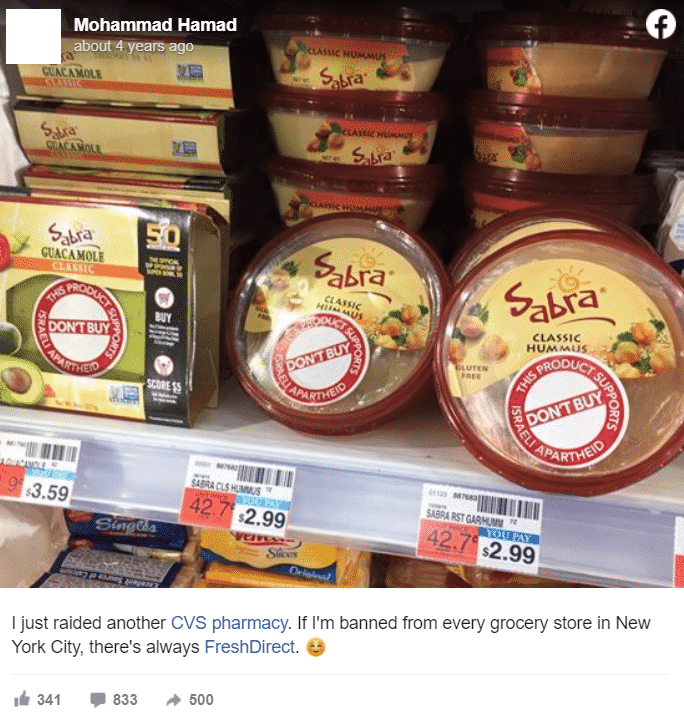 It’s probably a fake name but Facebook will obviously know more about him and, in response to a subpoena, could deliver up his real identity.

CVS Pharmacies will probably want to ask the police to look into this case. I’d say (if you can catch him with the roll of stickers in his hand) this should be the charge at least. If he damaged more than $250 worth of Hummus he could be facing something more serious.

And CVS knows this now:

@NotAntiSemitic @CVS_Extra Mohammad Hamad claimed responsibility in a facebook post https://t.co/jAy6fBKzOS in case you want to talk to him

Let’s see what they do next.

Update 11:30 14 Jan 2016: Some more internet sleuthing and we seem to be learning more about Muhammad Hamad:

.@brianoflondon @Israellycool How can someone who participates in Brooklyn Pride justify shilling for Hamas? https://t.co/Kzjjm2MSdc

Which links to this:

And he also appears to be an alumni of  Cuyahoga Community College (Tri-C®) and who is now a Program Administrator at this school and at that school, of course, it seems he’s involved with Students for Justice in Palestine.

“Those Palestinians in the diaspora are saying, ‘we are waiting’,” as they are refugees outside of their country”, said Mohammad Hamad, a New School student of Palestinian origin, who said he visited Gaza two summers ago.

Hamad described his arrival in Gaza, finding that there was camaraderie in the refugee camps. He said that some in the camp offered him food even when all they had was “one bag of rice”.

As usual the starvation libel: nobody has died of starvation in Gaza for years while a few hundred miles away in Syria 40,000 people are being truly starved. And this guy is sticking stickers on hummus.

So, as usual, we have someone living the American dream, filled with its tolerance for diversity happy to parade his hatred of Jews and Israel for all to see.