Hananya Naftali: God Put Me in IDF to Share Jesus and “Be The Light Among Jews”

I have already written about Israel advocate Hananya Naftali many times before – not because of the pro-Israel videos he puts out, but because of my concern about his intentions.

Don’t get me wrong – he clearly loves Israel and I believe he sincerely wants to improve our situation in the world. But from what I can tell, he also seems to have another purpose, and that is to influence Jews to become Christians. And my concern is his online popularity can put him in a position to do just that, especially among younger, impressionable “fans.”

As a Jew, I object to this wholeheartedly. While I am a big fan of my Christian brothers and sisters who support us, I am not one of those who cannot accept us Jews who follow Judaism. (Which means we do not believe in Jesus, nor should we).

In a video I included in my very first post on him, Hananya tells of how he decided not to talk about Jesus but rather to show Jesus through his actions – and thus provide the opportunity to share the gospel with his fellow (Jewish) IDF soldiers. A subtle form of missionizing if you will.

I have now discovered an earlier video of Hananya, in which he is even more direct about his intentions – he believes God put him in the army precisely to share Jesus with Jews, to be “a light among Jews.” He then states “It is not easy to be the light in the dark”, implying Jewish belief is the dark.

Note: As suspected, he pulled the above video. Not to worry, I suspected he would do this to hide his agenda, instead of being open and honest, so I downloaded it and uploaded it here:

I am very disturbed by this. Especially given what he has stated as his “top mission”

So ask yourselves: Why did he feel the need to pull the videos?

I have been criticized by some of you before for suggesting that Hananya may be motivated by trying to missionize to Jews. Some have pointed out he does not speak about this anymore in his videos. But I find it hard to believe he has abandoned his “top mission” in a matter of a few years. And given he even recently deleted tweets that did not look good for him, I do not trust his intentions.

So back to what I have been saying all along: Hananya, if you want to be a Christian lover of Israel, go for it! Just don’t you dare missionize to us Jews.

Update: I contacted him on Twitter to repudiate missionary activity and he refused to respond. I am convinced he won’t because he is still determined to “save” us Jews.

Update: As you can see, all copies of the video have been removed. Unfortunately, I never kept a backup copy.

Nevertheless, Hananya did not delete everything.

On his Facebook page, under the post where he linked to the now deleted video, the comments and his reactions are very revealing.

Here you can see him ‘liking’ the comment “May the Lord protect you and He has a purpose in placing you in a unit where you are the only light! May He mightily use you to bring others to Him!” 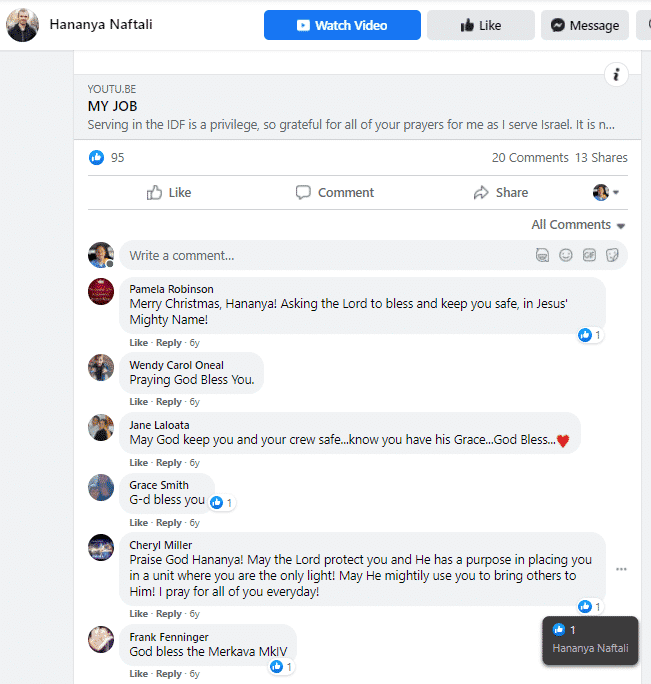 And here, he not only ‘likes’ this comment, but also responds with a thank you 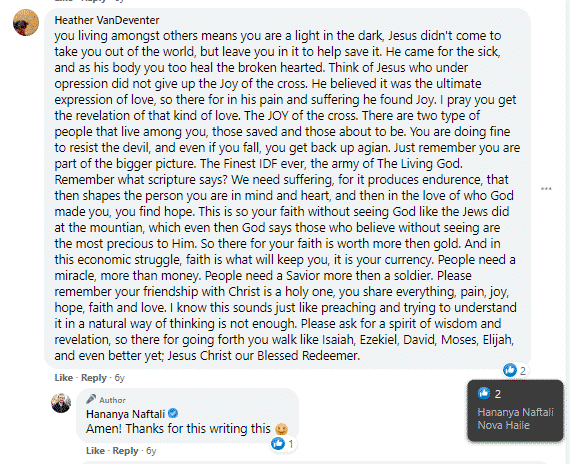 you living amongst others means you are a light in the dark, Jesus didn’t come to take you out of the world, but leave you in it to help save it. He came for the sick, and as his body you too heal the broken hearted. Think of Jesus who under opression did not give up the Joy of the cross. He believed it was the ultimate expression of love, so there for in his pain and suffering he found Joy. I pray you get the revelation of that kind of love. The JOY of the cross. There are two type of people that live among you, those saved and those about to be. You are doing fine to resist the devil, and even if you fall, you get back up agian. Just remember you are part of the bigger picture. The Finest IDF ever, the army of The Living God. Remember what scripture says? We need suffering, for it produces endurence, that then shapes the person you are in mind and heart, and then in the love of who God made you, you find hope. This is so your faith without seeing God like the Jews did at the mountian, which even then God says those who believe without seeing are the most precious to Him. So there for your faith is worth more then gold. And in this economic struggle, faith is what will keep you, it is your currency. People need a miracle, more than money. People need a Savior more then a soldier. Please remember your friendship with Christ is a holy one, you share everything, pain, joy, hope, faith and love. I know this sounds just like preaching and trying to understand it in a natural way of thinking is not enough. Please ask for a spirit of wisdom and revelation, so there for going forth you walk like Isaiah, Ezekiel, David, Moses, Elijah, and even better yet; Jesus Christ our Blessed Redeemer.