Rashida Tlaib Slips Up In Video Explaining Why She Supports BDS

Fresh from her Israeli-colored get-up, Rashida Tlaib has messed up again, this time in a video for Now This.

Note how Tlaib mentions her living grandmother living “in the West Bank of Palestine.” But the West Bank is named such because it is the West bank of the Jordan river. It is to the East (and North and South) of the rest of Israel 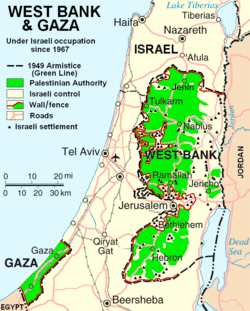 In other words, if you speak of the “West Bank of Palestine” then “Palestine” must be Jordan. Freudian slip or just Tlaib showing she does not really know what she is talking about – either way, it is funny!

Tlaib also speaks of granny having “to endure a checkpoint when she’s going to the doctors.” It sounds to me like granny may not not following granddaughter’s boycott call, at least when it comes to the Israeli medical system.

Tlaib might just be the gift that keeps on giving.

Update: Something else I missed:

Is she aware that "dual citizens" is an antisemitic trope used to refer to American Jews to imply that we have dual loyalties? And if she meant actual dual American-Israeli citizens, why would she reach out to this very small minority of Americans to push her BDS agenda?