Home Guest Posts Mirror Mirror On the Wall, Who is the Most Antisemitic of All? 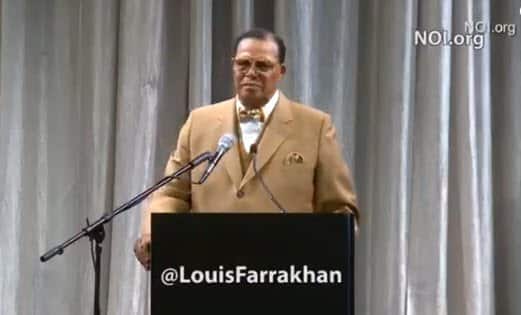 Very recently, a dear friend of mine directed me to an interview on 60 Minutes between Mike Wallace and self-proclaimed messiah of the Black people on a global scale, Louis Farrakhan.

Taking into consideration that this was screened about 23 years ago, I have always known that Farrakhan was one of the most narcissistic people out there. It’s hard not to notice how he speaks of himself highly and in the 3rd person quite often. What I find surprising is that during this interview he sugar-coated many things (i.e. reconciliation, there are bad Jews and good Jews, bad Muslims, and good Muslims, etc.).

I suppose that being the true narcissist that he is, he thinks that he’s smarter than most people, especially Jews, and that we’d warm up to his sweet talking, albeit deceptive rhetoric. To be frank, I’m sure many a misguided left-wing Jewish person would. He’s very articulate and charismatic. His manner of speech is very attractive, intelligible, eloquent, and intriguing, and he’s very relatable. He was raised by a single mother. He doesn’t know much at all about his father. He and his family struggled financially while he was growing up. He’s also very talented. He’s an excellent violinist and doesn’t have a bad voice. As a matter of fact, he’s so talented, he strongly considered going into show business. Yet when he had his first encounter with Elijah Muhammad, that all changed. Infatuated with the then newly formed Nation of Islam, Louis Eugene Walcott converted and became known as Louis X, and then eventually changing his name to Louis Farrakhan, devoting himself to this version of Islam and dedicating his life to it. Over the years, he’d speak to black American crowds without a filter, letting them know that it’s OK to hate, especially if the hatred is directed to the white man.

Regarding the Jews, his mad obsession is very plain. Think about it –how many Rabbis on any given Shabbat spend more than a fraction of a second discussing Farrakhan or the Nation of Islam? I can count on 0 hands. He and the Nation of Islam are about as relevant as the mite clinging to a dust ball. Jewish congregations throughout North America and the rest of the world boast scientists, lawyers, CEOs, CFOs, CIOs, doctors, CPAs, dentists, engineers of all types – and don’t forget the Nobel Prize winners for the sciences, and even an actor or 2 (ahem). Many a convert to the Nation of Islam converted while guess where? Incarcerated. Yup – grads from Sing Sing, Rikers, whatever, have joined mosques shouting Farrakhan throughout North America. Nobody knows that better than he does. He’s not only madly obsessed with Jews, but his hatred also stems from his deep jealousy of Jews.

The question remains – why should Jews throughout North America, if not the world, be at all concerned? After all, many people of all backgrounds simply ignore him and just don’t take him seriously. Well, isn’t that interesting? In Germany during the mid to late 1920s, people had the same attitude towards a homely, lonesome, unsuccessful, self-proclaimed fine artist from Austria, who was also raised by a struggling single mother as his father died when he was just 13 years old. He may have been a loser in art school and more than likely was not popular with the ladies when he was a teenager, but did he have the art of rhetoric down pat. His words hypnotized and mesmerized the masses on a grandiose scale, very similar to what Farrakhan does today. People need to understand, how do monumental tragedies such as the Holocaust begin? Do they begin with ruthless beatings and murder straight away? No. They begin with something a lot simpler than that. They begin with words. They begin with articles in the local newspaper seasoned with the age-old anti-Semitic jargon. The next step comes with speeches in front of small crowds, which lead to speeches in front of larger and then even larger crowds. It’s all very subtle and it’s very easy to ignore.

In Farrakhan’s case, he’s become a celebrity. His interviews and televised speeches are accepted warmly by many of his supporters. At the funeral of the Queen of Soul herself, Aretha Franklin, Farrakhan wasn’t only an invited guest; he was seated at the dais with other dignitaries including former President Bill Clinton. What was worse? Nobody seemed to care. Big time, loud-mouthed liberals like Whoopi Goldberg were seated in the audience and didn’t seem fazed at all. With all credit due to former President Clinton, he did seem very uncomfortable up there just two seats away from him. The leader of the Women’s March, Tamika Mallory, when interviewed about Farrakhan’s racist and anti-Semitic remarks, tends to downplay and even ignore the questions. She has even gotten flustered and frustrated because she sees nothing wrong with him. She doesn’t understand why his views against Jews (whether she agrees or disagrees with them) would be at all relevant. At best, Mallory has stated that “she doesn’t agree with everything that Minister Farrakhan states”, yet at the same time, she aligns herself with him and enjoys a close mentor/student relationship with him. Needless to say, Mallory has to yet to have criticized her beloved mentor for his blatantly ugly anti-Semitic jargon.

It has become very common to read in publications or to watch on television. Since anti-Israel propaganda is now a common thread on the left and especially the far left, the misguided and very ignorant Jewish person from that camp joins in the songs and mirth of those who “have nothing against Jews, but have a lot against Zionism”. Not only is this a mockery against the Jewish people as a whole, yet, even more so, it is used against Jews, Judaism and of course, Israel.

There is always someone who pushes the envelope. It begins with shaming on social media, then verbal abuse in public. Before you know it, it leads to outright assault. In recent years, antisemitic violence has increased dramatically throughout Europe and the Americas. In the streets of New York City, which has been a haven for Jews for well over a century, Jews have been harassed and attacked. The most recent horror, the massacre in a Conservative synagogue in Pittsburgh back in October 2018, where 11 people were murdered by Robert Gregory Bowers, a white supremacist, as a result of the culmination of race-baiting that is now commonplace among enemies of Jews on the right and on the left. One could argue that Bowers is not a follower of Farrakhan and has a completely different agenda. Yet when Farrakhan openly admits that he’s “not an antisemite, yet an anti-termite”, one knows his basic intention as people wish to get rid of termites. Farrakhan isn’t sugar-coating these terms. He’s outright serious. This type of rhetoric leads to only one thing, and it’s to bring his hatred to the next level. The problem is, people still turn a blind eye and try to rationalize and belittle their actions.

When people compare what is happening today with threats of boycotts against Israel as well as verbal harassment and even assaults on University campuses and in public throughout the world to pre-Nazi and Nazi Germany, we get labeled as either paranoid, over-dramatic and exaggerating. Unfortunately, anybody with half a brain can see what’s coming. What’s even more unfortunate is that intelligent people still don’t see it and go as far as even refusing to see it.

One thing for sure, somebody has to publicly stand up against him and shame him dramatically in front of millions. Making a fool out of him is the first step, yet in all these years, nobody has. Is it out of fear? Perhaps. Yet it will only get worse if something is not done. It is high time that somebody musters up the courage and puts this sack of human waste in his place in front of millions.