Home Aussie Dave We Are The Champions (League)

Tonight, England’s Tottenham takes on Dutch side Ajax in the second leg of their Champions League semi-final. And many Jews are split on who to support because these are the two most pro-Jewish, pro-Israel clubs in Europe, with a fascinating history. 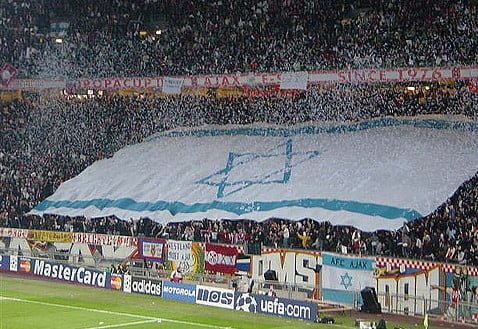 For most, the lustre of Tottenham’s Champions League duel with Ajax on Tuesday night lies chiefly in its rarity. Despite the richest clubs’ efforts to turn the competition into a self-perpetuating cabal, Mauricio Pochettino’s side have reached the last four despite not buying a single player in two transfer windows, while a dazzling young Ajax team are already mould-breakers, as the first outside Europe’s top five divisions to qualify for the semi-finals since 2005.

But the connection between them extends far beyond their recent overachievement. This is an occasion that also derives its power from clubs’ history of a shared Jewish identity, which has created both a profound sense of common cause and, at times, some problematic issues of self-expression.

Neither Tottenham nor Ajax have any cast-iron claims to be recognised as more Jewish than the other. While Tottenham garnered the greatest support of the Eastern European immigrants who settled in the East End, Ajax’s old ground, De Meer Stadion, was nestled deep in Amsterdam’s Jewish quarter, home to Sephardi and Ashkenazi communities until the Nazi invasion of Holland in 1940.

Today, the two clubs remain the most vocal in Europe when it comes to conveying their Jewish heritage. While Tottenham are perhaps more muted than during the 1970s, when fans would wear skullcaps to home games and fly the Israeli flag from the terraces as a reaction to anti-Semitic abuse, Ajax wear their lineage with a fierce pride. Supporters have taken to calling themselves “Superjews”, and to striking up refrains of En wie niet springt die is geen Jood (“whoever doesn’t jump isn’t a Jew”). For a time, Hava Nagila, the popular Israeli folk song, could be downloaded from the Ajax website as an official ringtone.

At Ajax, fans’ belligerent self-labelling as Jews has troubling dimensions. For some, it seems less a badge of true honour than a defence mechanism: for decades, Ajax have been taunted as Jews by those who despise them, not least Feyenoord’s ultras, prompting the subjects of such hate to take up the chants themselves.

As for me, I am more of an Aussie Rules Football kind of guy.