Israel Electric Corporation’s VP of Marketing and Regulation, Oren Helman, has penned a letter to Tim Sweeny, the founder and CEO of insanely popular online game Fortnite, asking him to remove from the game the ability of players to climb electricity poles. 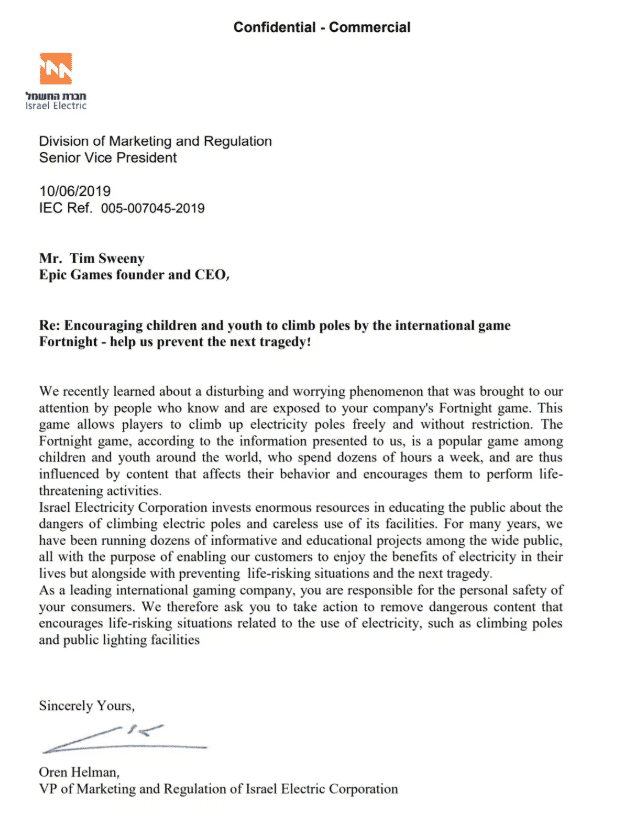 Naturally, this letter is starting to go global, with some tech sites making fun of it.

The game features wooden utility poles, but it’s news to me that players can actually climb up on them.

The phrasing of the letter makes it apparent that the people authoring it haven’t played Fortnite, and also that they use a spellchecker that doesn’t recognize the phenomenally popular game’s name. They are right that Fortnite is beloved by an audience of young and impressionable players, though it’s debatable how many of those are going to feel inspired to recreate any of the game in the real world. Fortnite isn’t exactly known for its realism, so a bit of artistic license around the safety and survivability of electricity should probably be allowed.

The letter mentions the game’s title as “Fortnight,” suggesting that the people who penned the document have yet to play the game or aren’t that well exposed to the title. Games, after all, as a medium do have and take the liberty of forming their own vocabulary sometimes.

It could also be that since games are streamed as much as played these days, the content might influence some people into another Bird Box challenge. Different recipe, same result.

Though we doubt any Fortnite players out there have ever felt the urge to climb utility poles or do any other silly things from the game in real life, the advice given by the power company is sound and should be followed by everyone, Fortnite players and the rest.

My reaction is this is peak Israeli. Complain about the ability of players to climb electricity poles, but the depiction of fighting with all kinds of weaponry is fine and dandy.

Reminds me of the famous “It could lead to dancing” Jewish joke.

What next? The Israeli Ministry of Transport contacting the makers of car racing games, asking them to depict safer driving practices? Actually, given Israeli driving, maybe that’s a good idea..