Israel hater Gary Spedding in 2011, months after it was already clear that palestinian terrorists were responsible for the murders of the Fogel family:

“The J’post article sickening invokes the cloudy and unclear death of the Fogel family an attack which I have the report and pictures of in my email inbox from the day after it happened. I find it sick that the J’post is still using this attack for political gain suggesting Palestinians are to blame when there has been no further information, news or otherwise released about the murders since the IDF conveniently caught two Palestinians kept them in torture for a month until they ‘confessed’ and then announced they had caught the killers despite the evidence and speculation of it being the work of a migrant worker from asia.”

I guess time heals all wounds, because Spedding has agreed to an interview with the same JPost. Mind you, the interview seems designed to paint him in the best possible light.

I first came in contact with Gary Spedding through a Facebook post. I had already heard of him as an activist who was known to work for peace and unity. Scrolling through Facebook one day, I saw that a friend posted asking if anyone could help Spedding, as he was being denied entry into Israel at Ben-Gurion Airport. I contacted Spedding, Knesset members and several other parties who might be able to help. Unfortunately, we were unable to help him gain entry into Israel. However, the brief encounter with this amazing person had me intrigued, wanting to learn more about him.

At that moment he made a vow in his heart to become a pacifist and to fight for peace worldwide. Using all forums available to him, including social media, Spedding started his activism to try to foster peaceful resolutions to all strife, violence, and wars.

With the five-year ban ending recently, Spedding repeatedly applied to the Israel Embassy in London requesting permission to fly to Israel. Without a reply and knowing the ban had expired, he booked a flight.

However when he arrived in Israel, he was again detained, his private documentation scrutinized, and he was promptly returned to the UK, for not coordinating his visit with the Israel Embassy. His ban was extended to 2021.

Spedding was bewildered. “The media and the pro-Israel activists are comparing me to Satan. All I want is peace,” he tells me. “I’m hoping Israel sees the wrongness in her actions and cancels the ban so I can come back to Israel, the country I miss dearly. And I really want to catch up with friends I’ve made from previous visits.”

Read the entire thing if you dare. I could hardly stomach it. Suffice to say, Spedding comes off as some kind of hero pursuing peace.

But he is no hero.

UK Media Watch has already done homework on this hater:

Spedding is chair of the Queen’s University Belfast Palestine Solidarity Society, the group which orchestrated the attack upon Solon Solomon, a former legal adviser to the Knesset Foreign Affairs committee, who was invited to speak to law school students at Queen’s University. Solomon was heckled by members of the university’s Palestine Solidarity Society (PSS) and the youth wing of Sinn Féin (the political wing of the Irish terrorist organisation the IRA) during a lecture, and the protesters then attacked the car in which Solomon escaped, attempting to smash its windows.

After being contacted about the attack, Spedding stated he does ‘not condone violence’, yet is evidently proud of his relationship with Holy Land Trust Director, Sami Awad – characterizing him as his “Best Friend, Mentor, colleague and leader” – who certainly does not condemn terrorist violence. Wrote Awad:

“[non-violent resistance] is not a substitute for the armed struggle. This is not a method for normalization with the occupation. Our goal is to revive the popular resistance until every person is involved in dismantling the occupation.”

Spedding’s mentor Awad has also hosted the extremist Greek Orthodox priest Atallah Hanna –  who can be seen here condemning the “Satanic” and diabolical Zionism, and promising that Palestine will be free “from the river to the sea”- at the Holy Land Trust.

“Ah but Anny, I do live in Palestine and i know a lot about this conflict! accusing people of not knowing about the conflict by the way just because they don’t live there is silly really, theres countless middle east experts who don’t live in Israel who know about the conflict in great detail, my friend Norman Finkelstein for one…. i would agree with my friend Norman Finkelstein when he describes Israel as a lunatic state.”

But there’s more. A whole lot more. Spedding admits to being “anti-Israel”

yet elsewhere denies it. Because he is a liar.

Likewise with his claims he is not a boycott Israel advocate 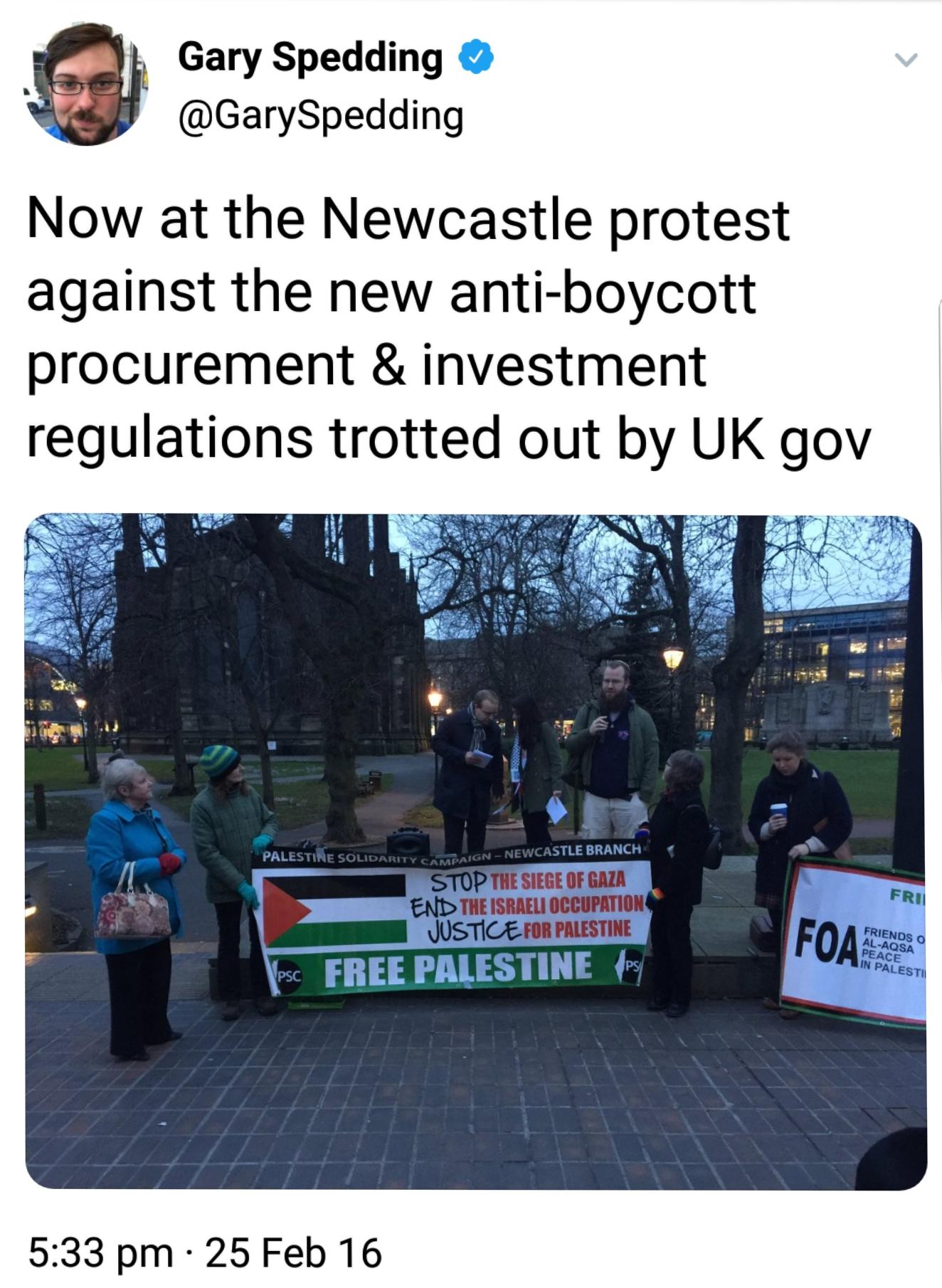 Did I mention that this “peace advocate” wants Israel destroyed?

In short, he is no hero. He is a villain. But the author of the JPost piece, Josh Aronson, won’t hear of it. 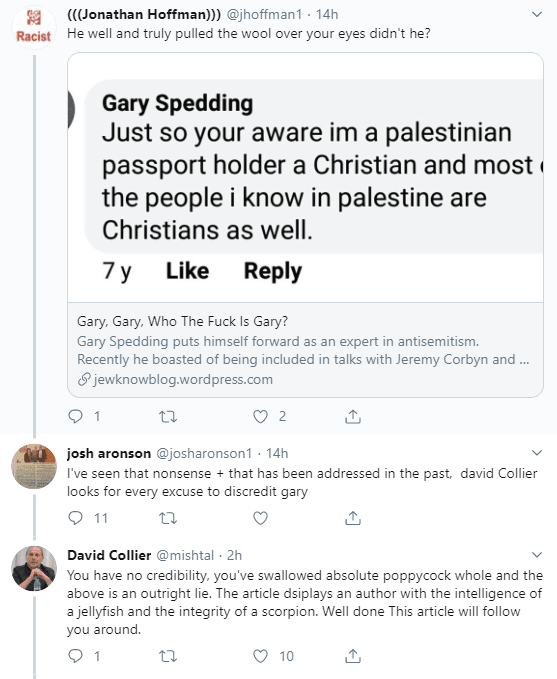 Calling David Collier, who has helped expose so much of the antisemitism in the UK Labour Party, racist is libelous.

But I somehow think others at the JPost have Aronson’s back.

I have long hated visiting the JPost site because every time I do I feel like I have contracted an STD – such is the user experience with all the spammy pop-ups. But now I have a more substantive reason to boycott them and encourage others to do so.