Last week, when I left you at the conclusion of episode one, I had contrasted between the big bad politics and the search for the wonderful simple acts of kindness of regular people, of the real Israelis.

This week, as we continue our journey, the worlds come together.

The truth is that they really do come together. 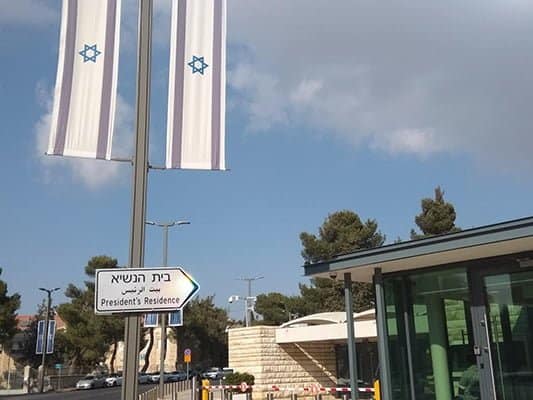 Just a few moments apart, in an otherwise charming section of Jerusalem, residents are periodically subjected to the sounds of motorcades with both the Prime Minister’s Residence and the President’s Residence nearby.

The streets are narrow. Sometimes it can be an adventure for the personnel who comprise the security detail to ensure the safe passage of the President, Prime Minister, and foreign dignitaries.

And so it was on one fine sunny afternoon on Rechov Aza that the sounds of silence came to a halt as the Prime Minister’s motorcade made its way down this narrow street approaching the official residence.

But wait. I notice that up ahead there is a car that is stopped at the curb, blocking traffic. An older woman is getting out of the car slowly even as the unrelenting motorcade approaches.

I dangerously enter the street, wave my hands in the air, and urge the drivers to slow down.

First there is a call on the motorcade loudspeaker to get out of the way. Then, as the front vehicle of the motorcade approaches, a security agent emerges, with a stern look on his face.

Then he sees the older woman, and his demeanor changes. He asks the woman if she’s alright. She says that she has pains, so it’s hard for her to move.

The security agent explains that the Prime Minister is waiting in the motorcade, and asks the woman and the driver of her car if they could just turn at the corner to a side-street so that the motorcade can go through without having to go dangerously into oncoming traffic.

The woman and her driver agree. The security agent gently places the woman back into her seat, puts on her seat belt, and thanks her for her understanding.

And so it was. The car with the older woman moved out of the way and the Prime Minister of the State of Israel was able to go home.

But we were not finished with this story. Mr. Netanyahu learned of the episode. The security team had photographed the license plate. At the Prime Minister’s request, they tracked down the owner of the car – the woman’s son.

Mother and son were invited to lunch a few weeks later at the Prime Minister’s Residence.

I am told that she is an 87-year-old Holocaust survivor. Her name is Sarah.

But we are still not finished with this story.

President Rivlin, I am told, had also learned of the story and was not to be outdone. He invited Sarah for a ride in his motorcade.

She refused to be picked up at her home at the taxpayer’s expense. So her son drove her to the President’s Residence.

When she arrived at the presidential compound, she was greeted by Mr. Rivlin.

It was a short drive to the Knesset. I am told that the contents of the conversation cannot be made public. It was a private discussion between the President and Sarah.

When they arrived at the Knesset, Sarah was not interested in going in. “Who needs politicians? I’ll stay here with your driver,” said Sarah.

And so, in the back seat, the President’s chauffeur and Miss Sarah played cards and then backgammon until the President would return.

While they waited for the son to come pick up his mom, the president and Sarah had a light refreshment.

The son arrived a short time later and took his mother home.

It will be hard to outdo this story of how the top officials in our country tried to win the heart of Sarah. But as we continue the journey, I promise to return in upcoming episodes to the regular people and everyday life of the real Israelis.