Know Your History: There’s Something About Lifta

The village of Lifta was a village on the outskirts of Jerusalem. It is often described by Israel haters as a village that was ethnically cleansed by Israel around the time of Israel’s War of Independence.

And this sob story from The Electronic Intifada: 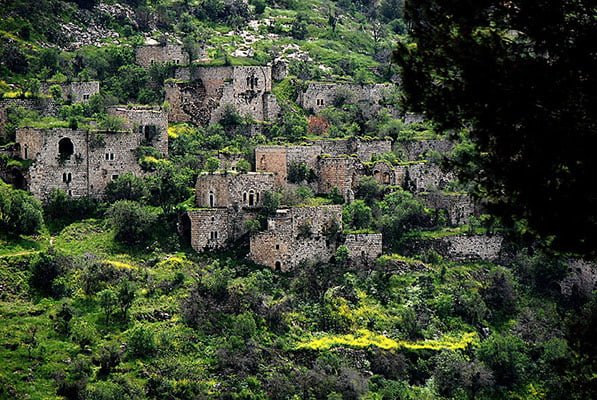 Most of the refugees, however, left the group and wandered the ruins of the village. Most went first to their family homes. They brought their children and relayed small anecdotes about the houses. They cleaned rubbish from the inside and the front stoop and sat silently inside the houses or outside the doors.

“We are only able to visit the village about once a year,” a refugee man told me as he held his baby and gazed out the window of his family’s home, “It is too dangerous to come alone because of the [Israeli] settlers that are usually here, so we have to wait for a group before we can come.”

Indeed, many Palestinian refugees from Lifta are not allowed to visit at all. The people who came on Friday lived in East Jerusalem, meaning they could travel to the village without passing through any Israeli checkpoints. Many of Lifta’s villagers, however, fled farther into the West Bank and beyond. Israel does not permit them to pass through the checkpoints and their village remains a cloudy reality passed down through the generations in stories and memories.

According to the refugees from Lifta, the village was once one of the largest and wealthiest communities in the Jerusalem region. The beauty of the old homes still standing upon the overgrown hillside pays tribute to that prosperous past. In fact, Lifta’s lands once covered 8,743 dunum (8.7 km2) and stretched from the hills west of Jerusalem right up to the gates of the old city itself. The population of the village in 1948 was approximately 2,550 (including 2,530 Muslim and 20 Christian Palestinians). Like most Palestinian villages, many of Lifta’s residents were dependent on agriculture and cultivated 3,000 dunums (3 km2) of land, including 1,500 olive trees.[2]

According to research compiled by Palestine Remembered, Lifta was originally a Canaanite village and during Biblical and Roman times it was known by the name Nephtoah. In the Byzantine period it was called Nephtho, and the Crusaders referred to Lifta as Clepsta. Before 1948, the village had been continuously inhabited for well over 2,000 years.

In the years leading up to the 1948 war, however, the village fell under attack by Jewish militias operating in the area. On the 28th of December, 1947 six people were gunned down in the village coffeehouse, by members of two Jewish militias, the Stern Gang (whose commander, Yitzhak Shamir, later became Prime Minister of Israel) and the Irgun (whose commander, Menachem Begin, also later served as Prime Minister of Israel).[3] Some of Lifta’s residents sold their property to European investors eager to acquire more land for Jewish settlement. Many more left early on. According to the descendents of the villagers, however, a significant number remained in Lifta into the first months of 1948.

The 1948 war which led to Israel’s declaration of independence in May 1948, started gradually. Jewish settlers were well organized and highly armed. The Jewish fighting forces included the Haganah (the official army of the Jewish settler community in Palestine) as well as several more radical militias (including the Stern Gang and Irgun). The militias were active in the area west of Jerusalem where Lifta was located.

Lifta was harassed by Stern Gang and Irgun militants through December 1947 and January 1948.

One of the refugees who returned to the village last Friday, relayed the story he was told about the attack on Lifta:

In late January or early February, the Stern Gang and Irgun attacked and seized the neighboring village of Qaluba and then invaded Lifta from the West. They occupied Lifta’s new town and the remaining residents took refuge in the old town in the valley. The village was cut-off from the west and anyone trying to leave was killed. The villagers resisted but were defeated after 9 or 10 hours of fighting.

By the time the entire village was occupied, most of the people had already left Lifta and fled into the West Bank, the rest were taken by truck and dumped in East Jerusalem. By February 1948, Lifta had been completely depopulated.[4] The Stern Gang and Irgun occupied the houses and broke holes in the roofs to ensure that they would be uninhabitable if the residents attempted to return.

The story of Lifta was repeated in numerous villages throughout Palestine in 1948. At least 418 villages were ethnically cleansed in the same way.[5] In fact, the evacuation of Palestinian villages was a matter of policy for the Jewish fighting forces. Israeli historian Benny Morris explains that “in the months of April-May 1948, units of the Haganah [the predecessor to the Israeli Army]… were given operational orders that stated explicitly that they were to uproot the villagers, expel them and destroy the villages themselves.”[6]

Lifta, however, is unique in the fact that it was completely depopulated in February, at least two months before the war was in full-swing, and three months before Israel’s declaration of independence.

Thanks to some painstaking research undertaken by fellow Israel advocate Rachel, the story of Lifta is way different to what has been portrayed.

Lifta was not historically a palestinian village

The narrative being presented is that Lifta was an ancient village. While articles like the above mention it formerly belonging to the likes the Canaanites, they whitewash Arab immigration to the area, giving the impression it was always palestinian village (and we do know there are those who claim the palestinians are the Canaanites!)

This report from the Palestine Post of Jan 22 1945 shows how in the late 19th century, property was being sold to Arabs by outsiders.

This is one example, but it shows how Arab ownership of land in this village was a relatively recent thing. This was no ancient “palestinian” village!

Lifta was not a particularly wealthy village

The Electronic Intifada article portrayed Lifta as “one of the largest and wealthiest communities in the Jerusalem region.” As this Palestine Post report from Oct 19 1936 shows, there were a hell of a lot of foreclosures there. Lifta was not a peaceful village

The Electronic Intifada paints Lifta as a village of peaceful farmers. However, Lifta in fact had a reputation as a particularly violent neighborhood, known for its petty crime, murders and sniper attacks on Jews even well before 1948. Here are some of the examples of Palestine Post reports making this very clear. And remember the Electronic Intifada claiming Lifta was “harassed by Stern Gang and Irgun militants”? Well, the following reports shed some light on this.

The Haganah last night blasted a three-story house in Lifta, a Jerusalem suburb, which was serving as a base for Arab raiders.

The Stern Group last night blasted several houses in Lifta, an Arab suburb Jerusalem, from; which a cumber of attacks have been made on traffic to and from Tel Aviv. Four Arabs were reported killed and three wounded, but none of the Jews hurt. In Tel Aviv the Haganah was said to be holding for investigation two non-Jewish Poles who had been discovered in the city armed with pistols.

This Palestine Post report from Jan 30 1948 indicates how the Arab Higher Executive issued an ultimatum to Lifta to follow the fighters’ orders or evacuate.

Clearly, they evacuated, judging by this Palestine Post report from May 10 of the same year, which indicates the anger of the invading Arab armies that Lifta’s abled-bodied men fled along with the women and children, who threatened them with court martial and property confiscations if they did not return (they clearly assumed they would win the war). So there you have it – the narratives about Lifta being advanced by the Israel haters are simply not supported by historical news reports. This was no wealthy, historically palestinian village of farmers who were ethnically cleansed by Israel.  Rather, it was a village rife with foreclosures, petty crime and violence, which operated as a base for terror attacks against Jews, and where inhabitants evacuated during the fighting – including the men, who the advancing Arab armies threatened with punishment if they did not man up and fight.