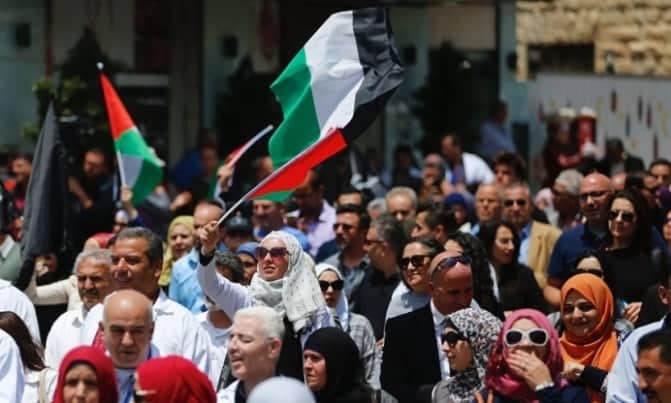 “It is either a two-state solution or a bi-national state” they said.

If it is not a two-state solution, then Israel has to absorb all the Palestinians in Judea and Samaria/Gaza and make them citizens, hence destroying Israel as a Jewish state. In this scenario, the Arab population will soon outweigh that of the Jews making them the majority who will start running the country. They can then abrogate the law of return for Jews, repeal the Nation State law and change the character of the nation. Then where will Israel be as a haven for Jews against the antisemitic world?

If Israel refuses to give the Palestinians citizenship after applying sovereignty over Judea and Samaria, it then means that it has become an apartheid state. And who wants to be labelled an apartheid state with all the horrors and evil it connotes?

So Israelis and their supporters who are calling for exercising sovereignty over Judea and Samaria are in a quandary and dilemma; give the Palestinians citizenship, then have the Jewish state destroyed, refuse to make them citizens and become an apartheid state.

Between a rock and a hard place.

Like most of the accusations against Israel in this conflict, those making the above assumption assert wrong premises and continue harping on them as if they are facts till their supporters latch on to and start running with them. Many times, even supporters of Israel find themselves joining the bandwagon and prattling the same wrong premise. Be it accusations of occupation, colonization, violation of international law, illegal settlements, etc, the same wrong premises appear.

For example, the proponents of these claims scream “occupation!” at Israel when actual definition of occupation by international law says otherwise.

They scream “illegal” when provisions of law said it is legal.

They scream “colonization of indigenous people’s territories” when facts said the Jews are the indigenous ones.

It never fails to amaze me how they are able to pull it off and have people who ought to know better, run around yapping the same wrong premise. In my hometown, we say that if a snake does not do that which made it a snake, children will use it to tie up gathered firewood. I think it is high time the peddlers of these claims are called back to order.

Now, the cliche is that exercising sovereignty over Judea and Samaria and refusing the Palestinians residing there citizenship will mean apartheid. The claim is wrong on many levels which can range from the definition of apartheid, its operation in South Africa and up to what are accepted practices all over the world.

Firstly, in 1973, the International Convention on the Suppression and Punishment of the Crime of Apartheid (ICSPCA) while describing apartheid stated that “for the purpose of the present Convention, the term ‘the crime of apartheid’, which shall include similar policies and practices of racial segregation and discrimination as practiced in southern Africa, shall apply to the following inhumane acts committed for the purpose of establishing and maintaining domination by one racial group of persons over any other racial group of persons and systematically oppressing them”. It then went on to describe those acts of oppression that could be termed apartheid.

Subsequently, in the 2002 Rome Statute of the International Criminal Court, it defined the Crime of Apartheid as inhumane acts of a character similar to other crimes against humanity “committed in the context of an institutionalized regime of systematic oppression and domination by one racial group over any other racial group or groups and committed with the intention of maintaining that regime”.

Based on the 1973 definition and characteristics of an act that could make it to be termed apartheid, one cannot in all honesty claim that Israel is practicing apartheid or will be doing such if it refuses to give Palestinians citizenship after exercising sovereignty, if how it was practiced in South Africa is to be used as a basis.

Secondly, the 1973 and 2002 definition of the crime of apartheid talked of a racial domination and oppression by another race.

The Jewish state of Israel is not a race. Israel is the nation state of the Jewish ethno-religious group of people. Ethnic groups unlike racial ones, are social constructs and not biological. They are social constructs like nations, schools, clubs, etc. Within the context of apartheid practices in South Africa where people were distinguished based on color and geography, race could be defined as stated in Merriam Webster dictionary as “a category of humankind that shares certain distinctive physical traits”.

With the above definition, Israel is not a race nor are the Jews. The Jews are made up of people of different distinctive phenotypical attributes; from blacks to whites who came back to their common homeland from diverse geographical areas. The Palestinians also are members of the Arab ethnic identity and not a race either. There is no situation in the country where one race could be said to be oppressing another one from the Jordan river to the Mediterranean Sea hence the accusations of apartheid in that area, has no merit.

Israel is a democracy and the nation state of the Jewish ethnic group of people as obtained in every other nation states in Europe and Asia which include Greece, Poland, Armenia, Serbia, Malta, Estonia, Hungary, Mongolia, Bangladesh, Japan, etc. The dominant character of Israel is hence, a reflection of its Jewish identity and traditions like those other nation states. It does not mean domination nor is Israel oppressing the Palestinians. Like every other nation, Israel protects itself from terror and other attacks which the Palestinians engage in as the Arabs point tactical and political weapon deployed since 1964. Israel’s defense of itself against the plethora of attacks from the arsenal of Palestinians cannot be called oppression.

In fact, many nations of the world from Canada to Australia and from Chile to Mongolia should all be termed apartheid when they refuse citizenship to illegal immigrants residing within their territories. Denial of citizenship rights to individuals or groups has nothing to do with apartheid. Those peddling that claim against Israel if and when it applies sovereignty over Judea and Samaria and even Gaza are wrong.

The “Palestinians” is a problem the Arabs created by themselves since San Remo when rather than accept and abide by the most fair, just and moral arrangement concerning Eretz Israel when the Ottomans relinquished it back to the Jewish indigenous and national owners, they chose otherwise. Rather than calling the Arabs to order, the UN encouraged that problem to fester because they felt they can bully Israel into paying the price for United Nation members greed. They ought to look for a solution to the problem they created but it will not be at Israel’s detriment. Plastering all these silly cliches against Israel and accusing it of all kinds of terrible things won’t work.

Emeka Paul is a Nigerian Zionist and author of the book "The Longest Prejudice."