A few days I posted about pop star Demi Lovato’s glowing posts about her time in Israel. Following her posts, Demi was subjected to the kind of overwhelming bullying and intimidation we have come to expect from the Israel haters, resulting in Demi posting this: 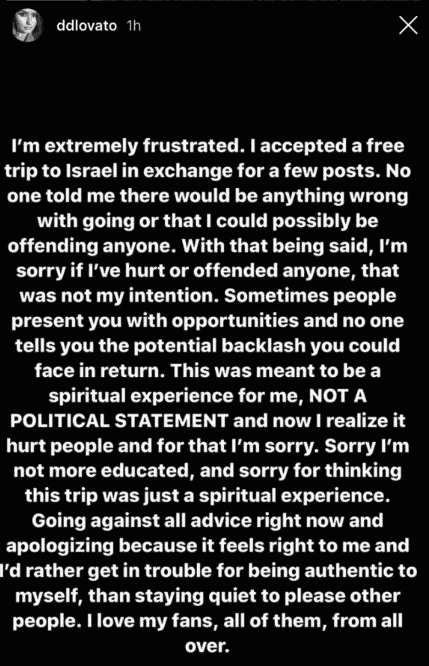 Lovato later deleted this post, apparently after speaking with her manager and others. From what I understand, it was explained to her that much of the nastiness directed towards her did not even come from real fans, but rather Israel hating ‘activists’ and bots.

Then reports surfaced in the Israeli media that Lovato had been paid more than $150,000 for agreeing to the visit.

All of this led to many pro-Israel people coming down hard on Lovato, unimpressed with her backtracking, feeling she threw us under the bus. How could she be ashamed of visiting the Shalva Band and Yad Vashem, people cried out? At the same time, there has been anger against those responsible for effectively paying a celebrity to say good things about us.

I have remained quiet during all of this, because my initial reaction was one of disappointment tinged with genuine concern for the pop superstar, whose battle with mental health issues has been well publicized. As someone else who has been targeted by the haters in the most vicious of ways, I could imagine Lovato not finding the backlash easy to cope with, leading to her “apology.”

I also like to do some more research (as many of you know), and found some of her now deleted Instagram comments in response to the haters. As you can see, they show someone genuinely hurt by the hate – and clearly unprepared for it. 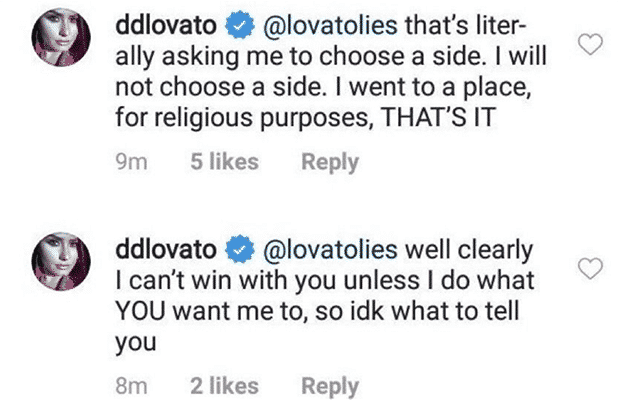 It was clear to me (and since confirmed) that those who organized her trip to Israel never explained BDS or the likelihood of her being attacked. Had she been briefed, she could have at least been more prepared, perhaps even turning off the comments to her Instagram posts.

Her comments also confirm that this was a spiritual – not political – trip for her, and her feelings about Israel were genuine. It has also now come out that after originally reporting that Lovato was paid that amount to come to Israel, Ynet later amended its story to say that the amount cited was how much it cost to bring her here.

I think it is worth listening to what my friend Ashley Perry had to say about the debacle:

I would like to wade into the Demi Lovato debate because I met her while she was in Israel (much to my children’s excitement). I was invited to meet with her one morning because she and her mother were very interested in learning more about their Sephardi heritage and ancestry which had been confirmed by DNA. I told them about the history of the Sephardim, our Hispanic culture and the forced conversions and how as many as one in four Latinos and Hispanics have significant Jewish DNA. She told me about her family name, history and birthplace all of which from my knowledge and experience confirm that she is indeed a descendant of Sephardi Jews.

Both she and her mother were extremely excited and asked a lot of questions. The meeting went on far longer than arranged and we even had a quick chat the two of us about some follow up ideas and queries.

I found her to be genuinely excited about her roots and being in Israel. She didn’t know much before she came but was fascinated by both the Christian and Jewish sites she visited. I believe that she came away with an extremely positive view of Israel and only upon posting pictures from her trip did she witness the dark and threatening side of anti-Israel advocacy.

She obviously felt that some had been hurt by sharing her experience and naively apologized for the hurt she felt she caused, but has since deleted that post.

People like Demi Lovato should be embraced and we should cut her some slack as she navigates the complexities that we in Israel, the Jewish world and those involved in pro-Israel activity now understand intuitively. Our opponents and enemies want to create distance between us and someone who witnesses the reality of Israel, so for those attacking her, well done you have played your part very well.

I believe that she will remember the good on her trip long after the nasty and malevolent posts she obviously received and I strongly believe that she is someone who because of her shared roots and ancestry can be a great source of engagement and understanding between the Jewish and Hispanic and Latino people.

I empathize with Demi Lovato and I think you all should too.