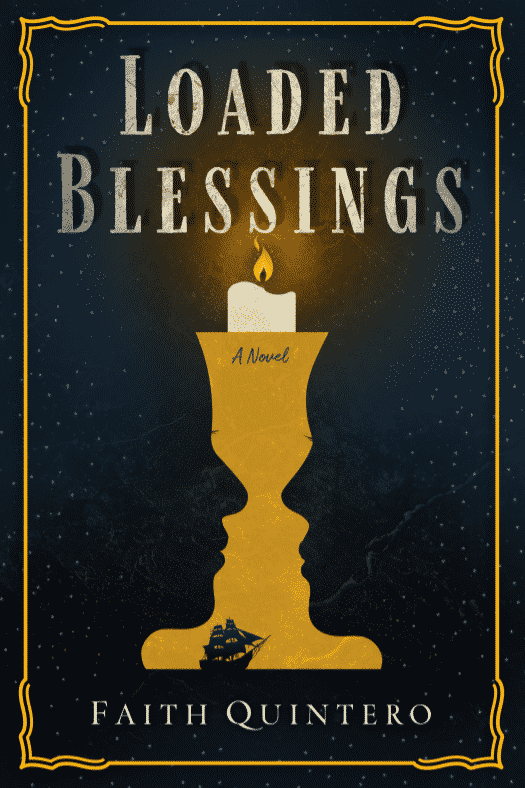 I belong to a book club, and so do many of you. Let me introduce to a book and its author who spin a web of intriguing reading about the Spanish Inquisition.

Alternating between Inquisition-era Spain and modern day Israel, Loaded Blessings is the story of a family who loses almost everything as they flee into exile, but is left with a powerful heirloom that reaches across time.

Abi Segil, an American archaeologist, jumps at the chance to examine artifacts from a sunken ship discovered off the coast of Tel Aviv. Ever since she inherited a centuries old Sabbath candlestick holder, she has been yearning to find its counterpart. She believes it could be among the artifacts of the medieval wreckage.

Five centuries earlier, in Castilian Seville, Sancia Pareja watches her community succumb to the horrors of the Spanish Inquisition. She is eventually forced to make a gut-wrenching decision: convert from her Jewish faith, leave the only land she’s ever known, or accept death at the hands of a royal edict. When her Catholic friend, Baltasar, crafts a set of bronze candlestick holders for her to take on her journey, she has no idea how his gift will reverberate through time

Quintero graduated from Emerson College, earning a BS in Mass Communication and then from Harvard University, earning an M.Ed., focusing on human development and psychology. She attended a semester at Tel Aviv University in Israel and worked as a volunteer on a banana plantation in Kibbutz.

I recently spoke with Faith about why she decided to write such a Zionistic novel.

Why did you write the book?

I set out to write this novel in response to the Mavi Marmara incident in May 2010, when a flotilla of six ships were en route to disrupt Israel’s security blockade on Gaza. Egypt has also taken steps to keep their citizens safe and implemented a blockade against Gaza the same year Israel did, the year Hamas took over in 2007. But no “humanitarians” set out to bring attention to, or to interfere with, Egypt’s blockade. Israelis did what they needed to do to keep their citizens safe. They were fortunately able to stop five of the six ships with no problem, no casualties. As soon as the IDF lowered one soldier on board the belligerent sixth ship, he was brutally attacked by its passengers. By the end of the confrontation, seven to ten Israelis were injured and 10 of the aggressors were killed. Though all but one who were killed were linked to a terror outfit abbreviated IHH and some had previously expressed a desire for martyrdom, the global response was less than supportive of Israel, a country smaller than the island of Sicily, fighting for survival in a neighborhood surrounded by hostile enemies.

That was when an Israeli friend of mine said, “I wish the world could understand.” I’ve had that same sentiment for a long time. But, hearing him say it awoken the mama bear in me. That was the moment I made it my mission to do my part.

That was in 2010.  After I briefly considered various mediums, I locked in on a novel. I had never considered writing a novel before then (though I have always loved writing and edit papers as a hobby).

But, before the Flotilla incident, I was already concerned about a trend that was becoming too prevalent – increasing hostility against Israel. The BDS movement, an attempt to single out Israel for boycotts, divestment and sanctioning, to isolate, undermine and ultimately destroy the only democracy in the Middle East was well under way. And on the heels of that, the erroneously named “Israel Apartheid” week. The theatrics were not only intimidating for Jewish teens and other Israel supporters on college campuses, they were effective. They fed off the ignorance of kindhearted but under informed people.

Why write about The Spanish Inquisition?

I happened to come across Edward Kritzler’s Jewish Pirates of the Caribbean. It’s understandable it came to my attention then in that it was published in 2009, the year before I started on my project.

Edward Kritzler’s book pulled me into an era I hadn’t given much thought to previously. Until I found his book, 1492 was simply the year Columbus sailed the ocean blue. Not much more or less. But while reading about “How a Generation of Swashbuckling Jews Carved Out an Empire in the New World in Their Quest for Treasure, Religious Freedom and Revenge,” I became captivated by the medieval history, the heroism, the intelligence and also the cruelty and injustice of the period. Also, in 2009, the year before I started to write, the year before the Flotilla incident, the Tamar natural gas field off the coast of Israel was discovered. The Gabriella Field off the coast of Tel Aviv was discovered a few years later and became the perfect location for my sunken wreck. An ancient wreck in a modern state provided the back drop for my story.

What did you know about both topics before writing the book?

I knew a great deal about Israel before I started to write the novel. Yet, as I wrote and researched, I learned more. At times, when I would check the news, I would look at the comments sections. Often, when I saw anti-Israel comments, I would look up whatever “facts” the poster would claim. Each time I did, I saw how a truth was distorted or how a lie was embraced as fact. Periodically I saw a troublesome comment that checked out and just accept that Israel isn’t a perfect country, but it is the most lied about country and Jews are the most lied about people.

What has been the response now?

I’ve had mixed responses, specifically regarding the end. I don’t want to give it away, but the ending was quite deliberate. I wanted a conclusion that would be satisfying but not predictable nor cliched. I played around with some drafts to keep it a little less controversial, but chose to end it with a little controversy. Some people have told me that they loved it – others, not so much. I didn’t want the conflict imposed on Israel to be the only talking point – so I added more. I do question if I took the best route. At the same time, life is messy – and so a good story would be too.

Really – I’d like my reader to be anyone with a sense of curiosity about the world and history. Anyone who really cares about searching for truth.

I would think that Loaded Blessings could appeal to a lot of Jews but also to non-Jews. With the DNA testing companies that detail people’s ancestry and at times finds relatives, more and more people are discovering a previously unknown Jewish lineage. Someone told me about their such story at my first book talk. And, my husband not only recently found his biological father from one of those databases, he learned that he has a haplotype linked to the Levant and Spain. I’m Ashkenazi. He recently joked, “so your book is about my people.”

Have you been to Israel?

Yes. I first landed in Israel in August of 1989 about one month after her citizens suffered through their first suicide bombing. A Palestinian killed 16 people on a bus in Jerusalem. In 1989, there was no security wall. (It was first considered by Yitzak Rabin more than ten years later. The Wall was still in the middle of completion in 2005 when by the time about 1000 lives were taken by the Palestinian terror groups of Fatah, Hamas and Islamic Jihad.)

That summer, I took Ulpan, though could never speak Hebrew confidently or even close to fluently. I attended Tel Aviv University for a semester of my junior year of college. During the break between Ulpan and TAU, I lived on Kibbutz Magal and worked on the banana plantation for three weeks. It is probably there that my fondest, happiest and most painful moments happened. I deep affection for that place.

I learned a lot during that semester, as much out of the classroom as in it. Yet, I recall thinking “the more I learn, the more I realize there is a lot I don’t know.” I did know that there was a lot of aggression against this wonderful but imperfect country. I didn’t realize how severe it was then or how much it would continue to multiply.

When I started to write, I returned to Israel (2011) for inspiration and to realistically place the characters in the settings.  I love Israel and hope to return again before too much time passes. Plus, I need to visit some special people. My family hosted a shinshin for 6 months this year. I love her and her mother and look forward to meeting the rest of her family and maybe also reuniting with some of her Israeli friends who lived near me as they also served in the shinshinim (nickname for Shnat Sherut – year of service – when Israeli kids graduate from high school and do a year of volunteer service before joining the IDF or IAF) program.

I also visited Seville, where the early part of the novel takes place. I was a bit disheartened to see the absence of memorials or markers that describe where each auto de fe took place, where the government burned innocent people to death, which churches were once synagogues and so on. The Juderia has become a quaint tourist destination with souvenir shops and restaurants without a hint of what the former residents were forced to endure.

My novel isn’t the solution to the one sided coordinated aggression against the people on a strip of land, a size that is two tenths of one percent of the Middle East  – but it is a part of a solution and also the proverbial ladder to people who have become activists before they’ve become informed.

Loaded Blessings is available on Amazon.

Cindy Grosz is a Jewish activist who promotes projects, products and awareness to everything Israel and of international Jewish concern. She represents celebrity spokespeople who speak up for and about Israel. She is also a contributor and Co-host on The Jersey Joe Show 710AM WOR, Sunday nights at 7 EST, or available anytime, anywhere through iHeart Radio.
Cindyscorners@gmail.com
Twitter: @cindy_grosz