The Writings of Ahava Emunah Lange: Thank You G-d For Not Giving Me What I Always Wanted… 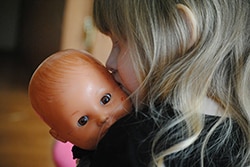 Our family started out like a modern-day American family. There was Mom and Dad, then came me, a couple of cats, a dog, and my adorable little brother, Eli.

We were a happy family of four. I didn’t really meet many families who had more than 2 or 3 kids but then one year, my mom got sick. She was REALLY sick. My mom was so ill that she had to be in the hospital and we didn’t know when we’d see her again. She had a neurological illness which, we suspect was Guillain Barre Syndrome. It was scary.

During or after that time, my parents realized what was most important in their lives I guess or maybe they felt that they could have lost my mom and she was really so good at being a mom; why not add one more to our family? I remember being told that I was going to have a baby brother or sister! I was so extremely excited because I’d always wanted a baby sister! My parents hired a midwife and they planned an early 1980’s home-birth.

As the pregnancy progressed, my mother’s belly doubled and grew so large, for such a fit and smaller-framed woman, many people stared and made comments about the possibility of twins. She just laughed. It was the time before mass ultrasounds were performed and the midwife was keeping everything professionally measured. There was one baby in there and I prayed every single day for a baby sister! I collected pink baby onesies and dresses. When friends gave us gifts of little boy or girl clothing, I caressed and held onto the girly outfits.

Suddenly, mere weeks before the due date, a second heartbeat was detected and the measurements showed the telltale signs of twins growing! My parents went privately to see an Ob/Gyn and sure enough, there were the two huge and fully formed twins staring back at them on the ultrasound, almost too big to fit on the screen! How I prayed and prayed for a baby sister and now my chances had just doubled!

My mom went into labor only 2 weeks before the twins due dates and the next morning my brother, Eli, and I received the exciting news that we had two new identical twin brothers, Matt and Levi. Over 15 pounds of healthy bouncing baby boys! I admit, I was disappointed for a few minutes. G-d, hadn’t I spent enough hours each day praying for a baby sister?

As my brothers grew, we all grew more and more in love with them. We were a house of 3 brothers and me and our bigger family was wonderful.

Years passed and the 1990’s came. My parents decided to expand our family again. I was certainly going to have a baby sister this time! Sure, I was already a teen, and I’d never have the little sister I’d dreamed of playing dolls and house with yet still, I was desperate for a little sister. I prayed daily for the sister of my dreams.

This time around, we were living in Israel and every pregnant woman had ultrasounds and because my mom was considered to be having an “elderly pregnancy” at the ripe age of 39, she was encouraged to have an amniocentesis and therefore we knew early in the pregnancy that my dreams of having a baby sister were yet again not to be. My 4th sibling was destined to be Gabriel Josef, another brother. Was I disappointed? Only for a few minutes. I was mostly just so looking forward to having another baby in the house and the whole family was very excited to meet the first Israeli-born child in our family. I was 16 when Gabriel was born and quite enjoyed the mistaken assumptions that I was his teenage mother when I carried him in a baby carrier or pushed him proudly down the street in his baby carriage.

Around the time that little Gabriel was six or 7 months old, my mother became very sick again. She was bitten by a sand-fly and contracted a debilitating illness known in Israel as: Shoshanat Yericho; the Jericho Rose. Her leg swelled up to painful proportions, she suffered from pain, weakness, and a very high fever. There was little my mother could do but rest and try to care for baby Gabriel and the rest of us.

After about four or 5 months, my mom was finally well enough to start her road to recovery. After so many months in bed, unwell, and not eating, you may have expected a very frail and emaciated woman to emerge yet that wasn’t the case. My father even made the faux pas of commenting on what seemed to be a growing belly on my mother… the same week that she made a delicious chopped liver delicacy for Shabbat which, had come to symbolize a craving that meant one thing; Mom is pregnant! I remember literally jumping up out of my seat for joy! My mom was probably pregnant and I MIGHT be getting a baby sister! Please G-d! I began to pray…

I was already a senior in high school. Many of my friends already thought my obsession with babies was a bit unusual. I loved looking after my younger brothers and never needed to be asked. I volunteered. The day after Shabbat, my parents were already anxious to visit the doctor and I couldn’t wait to find out if my little sister was finally on her way!

Being that my mother was already in her 5th month of pregnancy (surprise!) it took only a quick minute with the ultrasound to discover that baby boy #5 was on his way to our family. This time I was disappointed more than the other times because I knew that this was definitely the last chance I had to have a sister as my parents were both in their 40’s. Luckily I had a few months to get used to the idea before my youngest brother was born on the night of the Pesach Seder in my final year of high school. I stayed home to take care of my brothers and as soon as my mom walked in the front door, she handed me my new brother so that she could cuddle little Gabriel, who was most certainly in shock. I immediately fell in love with little baby Josh and have loved him dearly ever since. I quickly forgave G-d for giving me 5 brothers and not a single little sister.

In 2006, My brother, Eli, gave me my first sister, Briana. My brother Levi gave me my second sister, Hadar, and Matt gifted me with my third younger sister, Maya. I am more than blessed with the most wonderful sisters that a person could have!

I’m so thankful that G-d said, “No,” to my prayers for a biological sister. In doing so, a great kindness was bestowed on my entire family because I carry the BRCA1 mutation, inherited from my father. Who knows if that’s the reason? Nobody but G-d, however we are all spared the worries of breast and ovarian cancer possibly preparing to prey on one of my sisters. When I was diagnosed with ovarian cancer, at such a young age, it suddenly became clear why I never had a biological sister and I’m forever grateful to You Almighty L-rd, King of the Universe. Thank you for giving me 5 healthy brothers and thank you for my fabulous sisters-from-other-misters. I love them as much, if not more, than any biological sister could be loved.