The following letter – purportedly from a group called United European Jews – has been circulated by the anti-Israel, pro-Corbyn crowd. 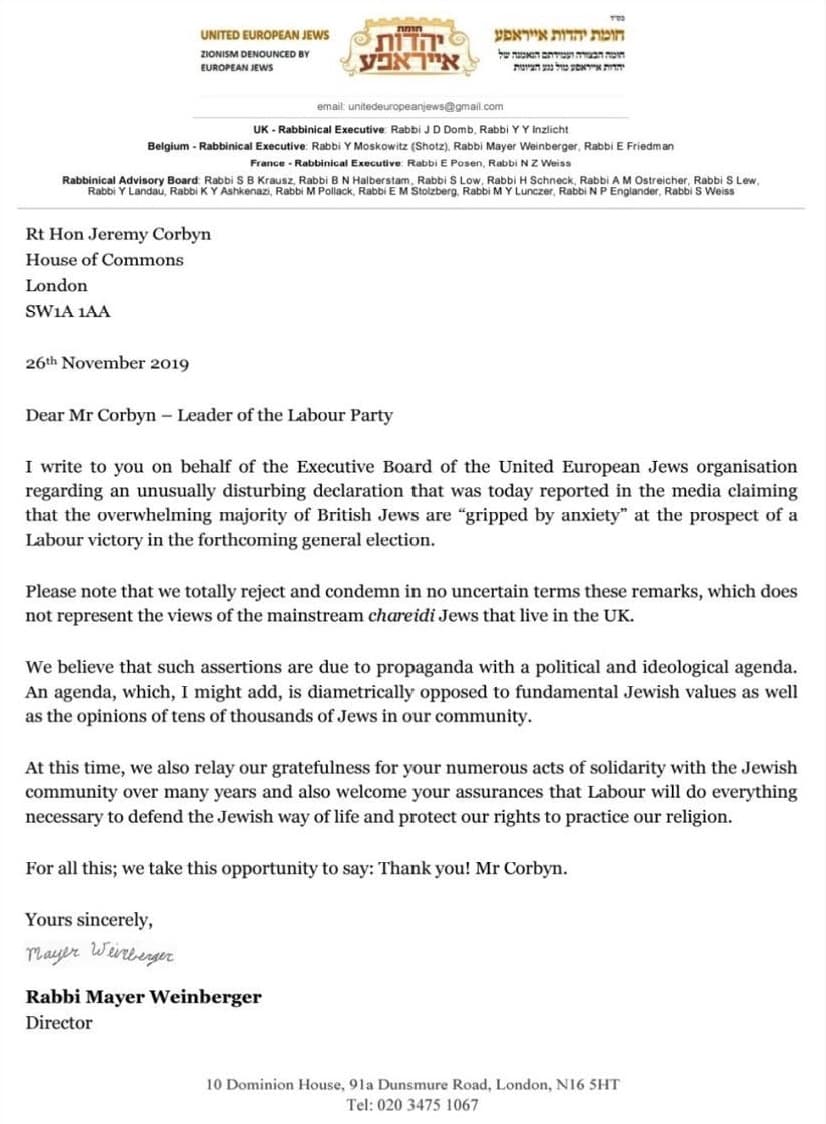 Emily Apple of The Canary calls it “The letter from a rabbi that won’t make the front pages of most of the mainstream media.”

But there’s something not kosher about it.

Discrepancies in the names of the Rabbis appearing on the letterhead

Whoever created the letter seems to have taken at least some of the name of the Rabbis from this press release from the website True Torah Jews.

Except they apparently weren’t careful enough.

Here are the Rabbis listed on the Corbyn letter.

The True Torah Jews letter mentions a Rabbi Yaakov Dovid Domb, which should have appeared as Rabbi Y D Domb on the Corbyn letter. 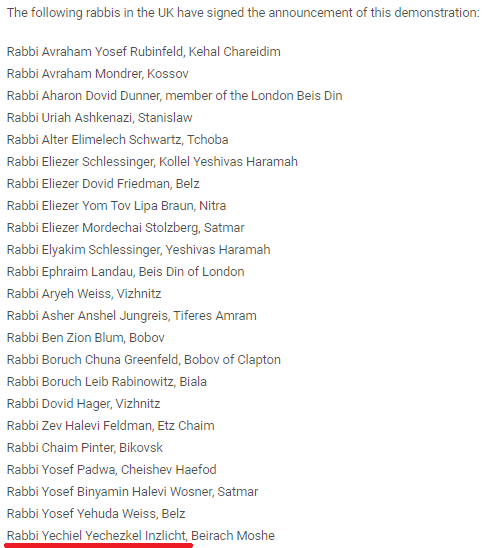 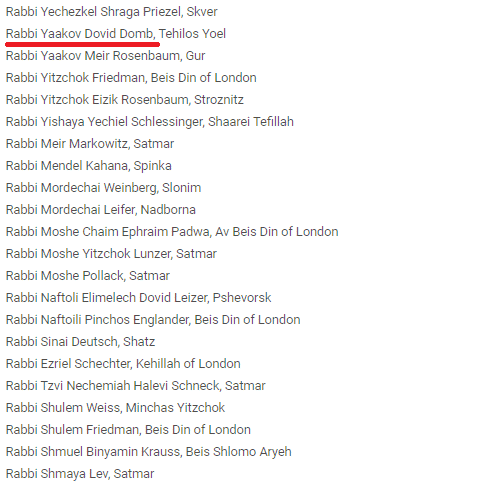 The signatory of the letter is someone called Rabbi Mayer Weinberger. But the website calls him “Rabbi Meir Weinberger,” which is the same spelling as appears on the True Torah Jews list. 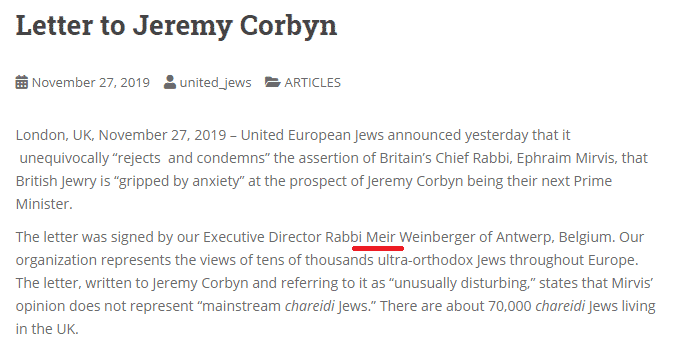 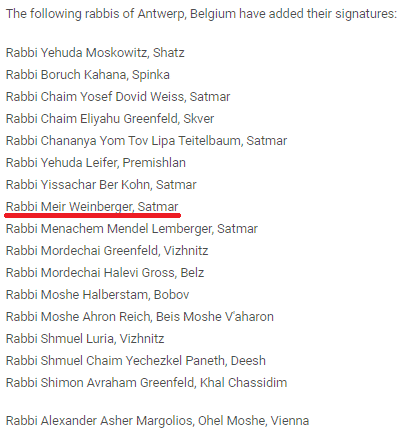 In fact, it seems the originator of the letter had a real hard time transcribing (or just got lazy). From the Rabbinical Advisory Board listed on the letter:

I guess he moves around a lot?

I can also point out the following further discrepancies:

But these may be different people, which I will explain a bit further on.

I should also mention that some of the names on the Corbyn letter are new in the sense of not having any similar counterpart in the TTJ list. Google searches would seem to indicate they don’t exist at all.

The phone number is fake

I called the phone number on the letter. I wanted to ask a few questions. I got this response:

"the number you have called has not been recognised".

Unlike anti-Zionist Jewish organizations the Neturei Karta and True Torah Jews Against Zionism, this group’s online footprint is solely a website. It was registered only in March of this year, by someone remaining anonymous.

Their mission is a Copy-and-Paste from True Torah Jews

One of the first posts on their website is their supposed mission. 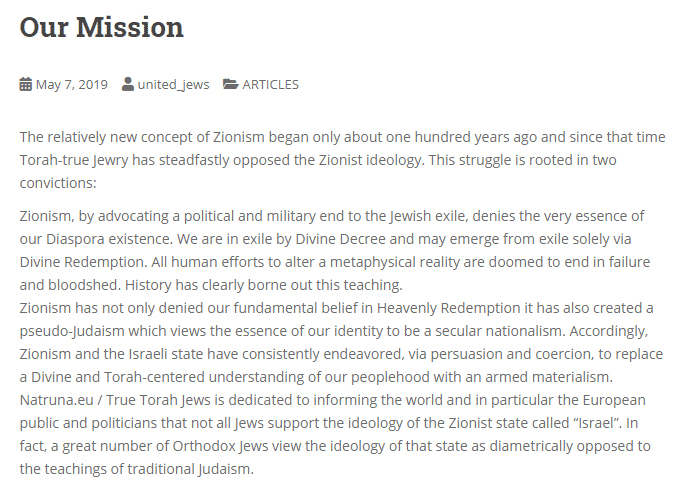 It is a word-for-word copy of the mission of the group True Torah Jews, from which they tried to grab the names of the Rabbis. 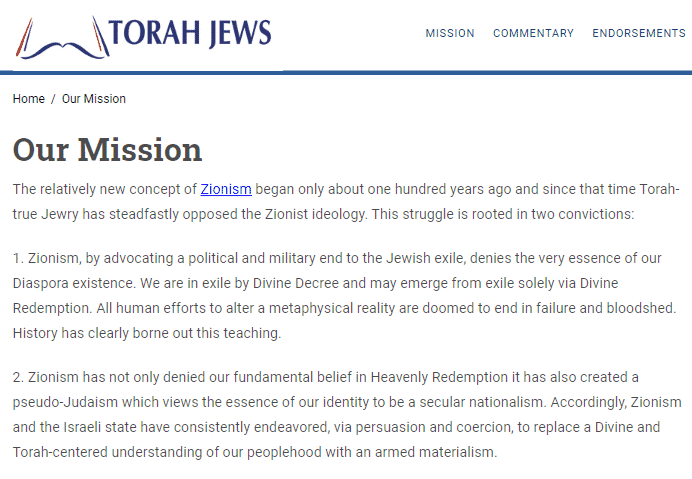 The question is: is the letter fake, or could there be another explanation for the above?

A Google Street View search of the address at the bottom of the letter (10 Dominion House, 91a Dunsmure Road, London), seems to indicate it is a bakery with a house on top. 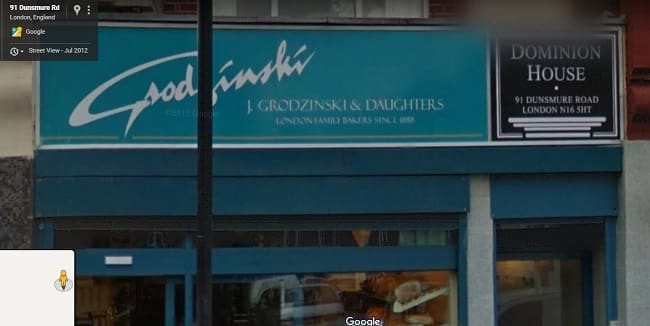 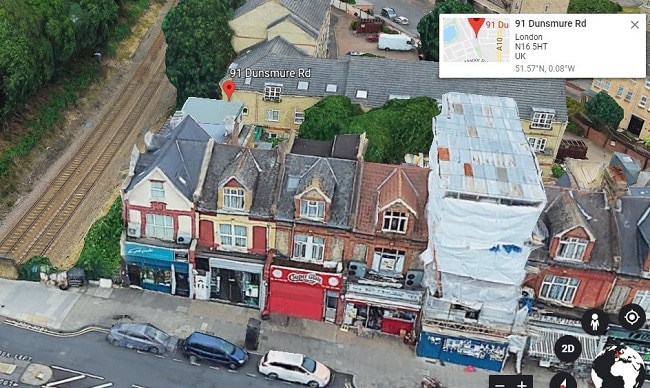 This area of London is Stamford Hill. It is known as a very Jewish area, and has a large population of anti-Zionist Jews like Satmar. A look at nearby registered businesses contains one that stands out for me: HIGHER TALMUDICAL EDUCATION LIMITED (registered since 1999).

“Talmudical” is not even proper English (it would be “Talmudic”), which indicates they are not native English speakers. And we know that members of anti-Zionist groups like Satmar only really speak Yiddish.

So here’s what I think. A member of the Satmar-linked group True Torah Jews wrote the letter. Since he can not really write in English, he made transcription errors or spelled the names of Rabbis differently in English on different occasions. (The instances of Rabbis with the same surnames but different first names could possibly be explained by fact members of this group contain many members of the same family). He may have provided a fake phone number because he did not want people calling at that address to ask him too many questions – perhaps because he did fake the names of some of the Rabbis, and did not place the real names with the permissions of the Rabbis themselves. They have done that exact thing before, after all.

A hassidic group disseminated a letter in support of Labour leader Jeremy Corbyn, who has come under fire for supporting antisemites, in which the signatures of haredi leaders in the UK were forged.

The Jewish Community Council of North London tweeted overnight Tuesday to “confirm and clarify this letter is fake and bears no authority from any of the assigned names.”

The letter, purportedly from the leadership of London’s haredi umbrella organization, the Union of Orthodox Hebrew Congregations, claims to have the support of the UOHC’s Principal Rabbinical Authority Ephraim Padwa, Senior Dayan (religious court judge) S. Friedman, and 27 others.

BREAKING: Leading UK Rabbis have released a letter to repudiate the false notion that British Jews are against @jeremycorbyn and/or the @UKLabour .

"We feel it's necessary to clarify that Jews have no connection with these irresponsible remarks! pic.twitter.com/z5TPPYFXMP

The Twitter account shared the letter as Rosh Hashanah began on Sunday evening, and was shared more than 1,600 times before the JCC debunked it.

Whether or not any of the names were fabricated does not take away the following point: these Jews are a small fringe group who can hardly even speak English. And they are supposed to be representative of the sentiment of Jews towards Jeremy Corbyn?

Update: This seems to be the second pro-Corbyn letter from this supposed group. The first was from April this year – right after their website was set up. 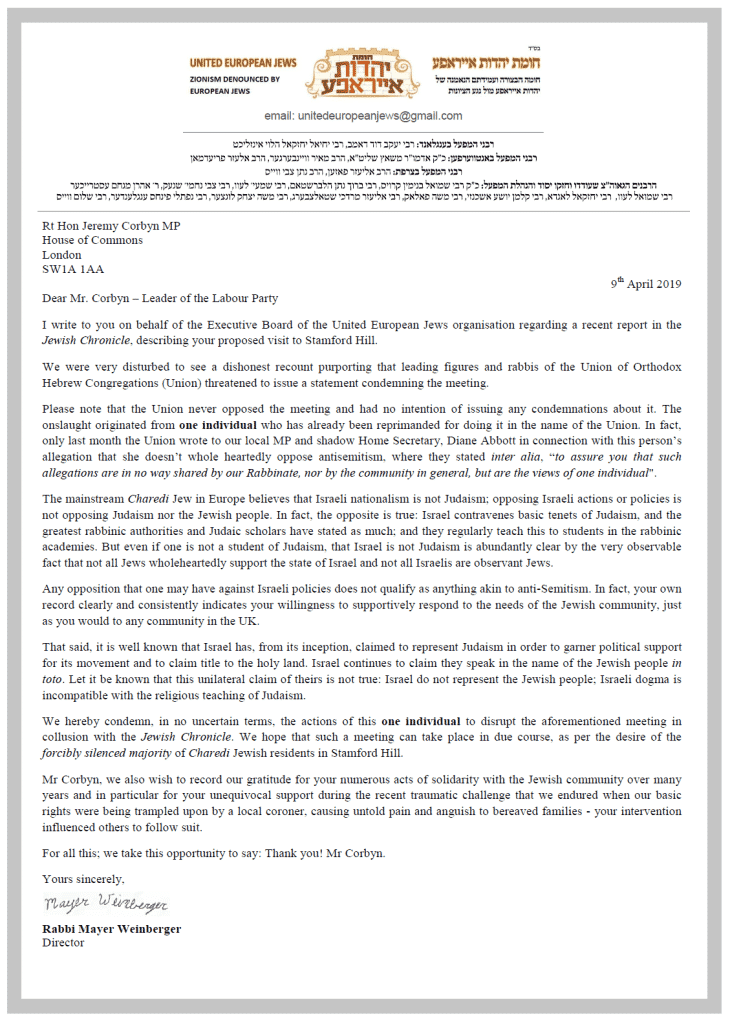 Note the signature is identical to that of this new letter. I believe the non-English speaker Satmar had someone create an English signature for him and he scans it in every time.

United European Jews is a pan-European organisation that performs research and advocacy concerning topics of Judaism, Jewish identity, and antisemitism. The institute was founded by Rabbi Mayer Weinberger of Belgium in conjunction with Jewish faith leaders throughout Europe.

If Rabbi Mayer/Meir Weinberger is in Belgium, why is the organization’s address in Stamford Hill, London?