Who would have thought that in 2019 New York wouldn’t be safe for Jews? With the spike in antisemitic violence, empty statements from politicians are meaningless unless we try to understand why Jews are being attached for looking like Jews.

For decades, Black Supremacy movements have spread virulent and baseless antisemitic conspiracy theories. Many of these theories trace their way back to a 1991 Nation of Islam book called “The Secret Relationship Between Blacks and Jews.” The book argues that Jewish people were the real force behind the Trans-Atlantic Slave Trade. It even blames Jews for the Ku Klux Klan! None of this is true. However, all you have to do is search Twitter for “Talmud slavery” to see how widespread this is. 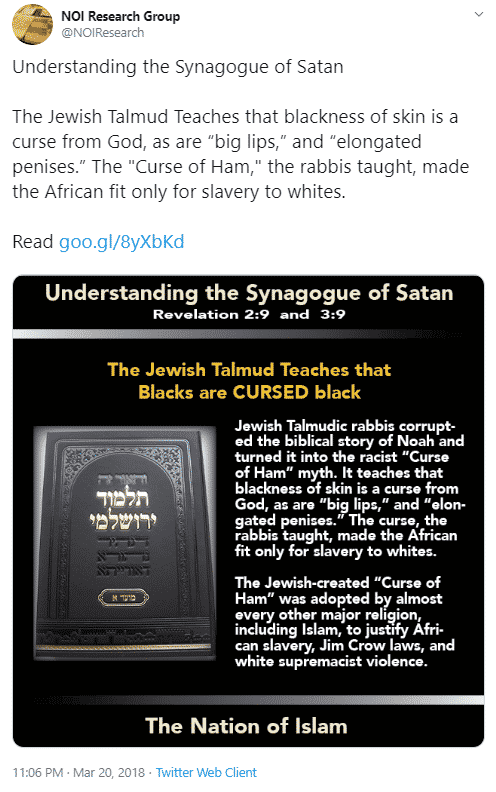 There is a terrible precedent for this. In the run up to the Holocaust, the Nazis used the Talmud for antisemitic propaganda by cherry picking quotes from the Talmud to prove Jewish people’s moral inferiority, and now the same lies and Nazi methods are being used by “human rights defenders” in their war against Israel.

In 2019, independent journalist and self-declared human rights defender David Sheen toured the United States to lecture on “JUDEA-AFRICA-AMERICA: Our racial relationship history & the crisis in Israel*Palestine.” Among college campus’, one stop was in in Philadelphia for the benefit of the Philadelphia Coalition for BDS. The lecture contains almost two hours calculatedly selected quotes and examples to demonstrate Israel’s moral inferiority because of its Jewishness.

It’s appalling that someone so unqualified—that is, someone who is not historian nor a bible scholar—is being lauded as an expert and given a platform to speak.  It’s criminal that someone is openly peddling in lies and half truths for personal gain, even if that puts lives at risk.

And what if I told you the lecturer was an Israeli? A Canadian born Jew who, ironically, used his Jewishness to move to Israel so that he can shit on the Israeli flag?

As far as I’m concerned, David Sheen has blood on his hands and it’s time that his race baiting is called out.