Palestinian Propaganda of the Day: The Freezing Kid of Gaza

An Israel hater posted this at the end of December last year (hat tip: Maks) 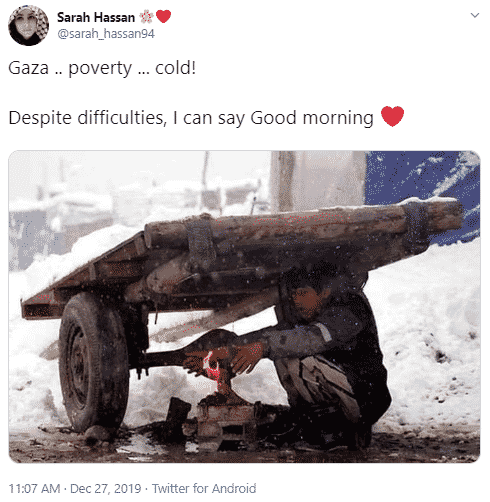 Since it did not come close to snowing in Israel in December, a rat was certainly within range of my nostrils. And sure enough, it never got lower than 6 degrees Celcius in Gaza over that time period.

A reverse image search indicates the photo was first detected online in 2008. Since the first instance is no longer visible, it is difficult to ascertain where exactly it was taken (this article suggests it is from Syria, but the Syrian civil war started in 2011).

In any event, the photo is not from Gaza in December 2019, as the Israel hater would have us all believe.

As a side note, if there was a kid out in the freezing cold and you walk by, do you:

a) Immediately give them some clothing or take them to a warm place; or

b) Take a photo of them

Update: This indicates the photo is from Kabul in 2006 (hat tip: Jackie).