Did a Saudi Religious Leader Really Pray at Auschwitz for Victims of the Holocaust?

A number of pro-Israel sites have posted about a momentous occasion at Auschwitz.

WATCH: A senior Saudi religious leader visited Auschwitz to commemorate and pray for the victims of the Holocaust.
He is the most senior Muslim leader to do so. Truly a historic day. pic.twitter.com/CAatPqksVx

But is that really what happened? Not exactly, according to this tweet in Arabic 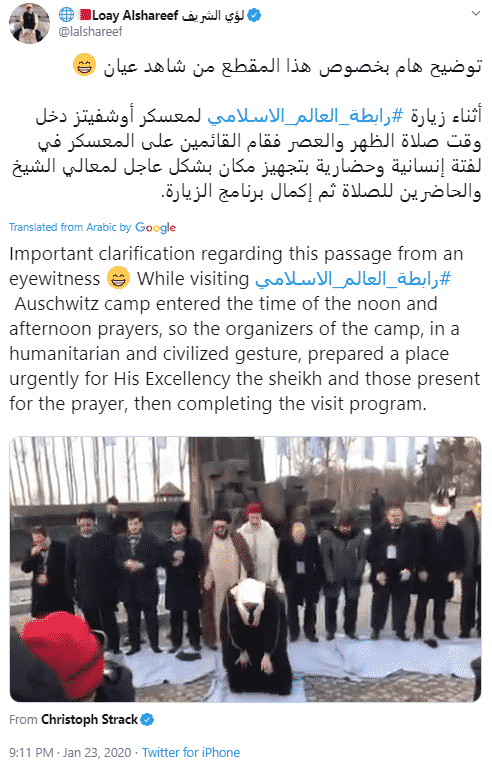 So which do I think is correct? This would suggest the second tweet.

It is not permissible to pray for dead non-Muslims as the prayers are of no value. You can emotionally support them, by hugging them, telling them you are sorry for them, and by encouraging them to look at Islam before it is too late.

And perhaps this is why the Arabic tweeter tweeted what he did.

Although perhaps it is not so cut-and-dry

According to this verse, God prohibits asking for forgiveness only for those whose fate in hellfire is certain. Otherwise, there is no reason not to ask for forgiveness for those whose fate is not determined. The torture of some of the inhabitants of hellfire will be reduced due to prayers and it was reported that some of those in hellfire will receive a lesser punishment because of the blessings of Prophet Muhammad (peace be upon him). Therefore, there is no limit to God’s mercy and generosity and there is no impediment to hold you back from praying for your deceased father by seeking God’s forgiveness for him and hoping that He accepts your intercession for your father.

And who cares? Well, I just think we always need to be accurate.

Having said that, it is momentous and appreciated to have a Saudi religious leader visit Auschwitz to pay his respects for the murdered Jews. And it is not the first time a Muslim leader has done so.